It is already mid July and it seems like June had just arrived and has come and gone so quickly. The Salmon fishing as expected has been very exceptional in the Port Alberni Inlet and offshore-inshore Ucluelet. The Sockeye coming into the Port Alberni Inlet have been upgraded to 850,000 fish with an escapement goal of 411,000 into the Somass River and then into two lakes, Great Central and Sproat. The original forecast had been for 600,000 but for these fish the ocean conditions over the past three years has been perfect for ocean survival rate and this has more than likely accounted for a much higher return. To date the escapement of Sockeye has been 230,298 with Great Central Lake receiving 93,630 swimming through the fish way. Sproat Lake has had a return of 136,659 swimming through the counters. The past week has been terrific for escapement returns with daily returns into Central Lake from 2,200 to 7,700 and Sproat Lake 2,300 as a low and a whopping high day of 13,000 pieces. 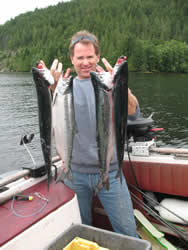 With escapement returns and fish catchable numbers by the commercial, first nations, and sport fishery to this date the 2010 Somass Sockeye run is 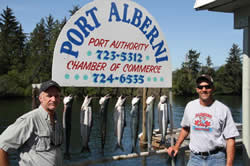 probably at fifty to fifty-five percent complete. The run size could very easily be upgraded this week once again. Sockeye sport fishing should continue right into August.

The Chinook fishing out on Vancouver Island ‘s West Coast has been dynamite. Ocean conditions have also helped the sport fishery on the coast which is experiencing one of the best sport Chinook fishing years ever. The Barkley Sound surf line areas have been off and on. There is a vast amount of bait fish offshore which the Chinook are gorging themselves on. This has limited the numbers of salmon that normally would come into the sound to feed on the rich resources of bait fish found along the edges of the surf line. 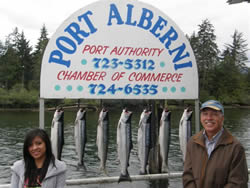 The Sockeye Sport fishery in the Port Alberni Inlet has been for the second year in a row phenomenal. Guests with Slivers Charters Salmon Sport Fishing and those who are fishing in their own craft from all areas of Canada and the United states have all had opportunity to limit on the number one commercial salmon. Everyone fishing the Port Alberni area has taken home limits of these tasty salmon to share with family and friends. Sockeye sport fishing in the inlet has been great from Lone Tree Point out to Bilton Point which is located at the far end of the Inlet. The weather over the last week has been extremely warm and the salmon are schooling in bigger numbers and are also swimming in deeper water. The Nahmint-Franklin area has had the best fishing during the early part of the last week with the salmon in 40 to 65 feet of water. The last day or two with the Inlet waters warming some of the fish have moved down to as low as 90 and 100 feet. Sockeye are attracted to color behind the boat and there is no doubt that those fishing with dummy flashers 8 to 10 feet behind their vessel and with four rods with flashers and choice of lure have been having the best success rate. The best lures seem to be (choice of each guide or sport fisher person) the mp15 which is a bubblegum color, the mp 2 and 16. Guide Dougs’ favorite is the blue and pink and the black and pink Angelos’ which unfortunately are no longer being made. The commercial glow 182-183 and also the pink and blue head mp hootchie are working very well also. For those that enjoy not using any type of lure the straight black hook (one) or hooks (two) are also working behind 22 to 28 inches of leader. Sockeye fishing is a fun activity for the whole family. Kids from four to nineteen have a great time and of course adults of all ages do also. Guests world wide visiting the beautiful Alberni Valley have taken part in this spectacular sport fishery and have all had a wonderful opportunity landing a salmon.

The Barkley Sound fishing has been off and on. The migratory flow of salmon swimming down the west coast 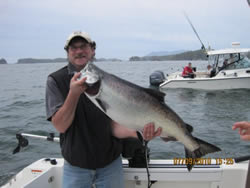 of Vancouver Island has been one of the best years ever. The Chinook have been coming in big numbers and are feeding heavily on bait fish out on the various banks. Some Chinook have moved into various surf line locations. Meares, Austin Island , Pinnacle Rock, and Edward King have had some good fishing days over the past few days. Guides Doug and John of Slivers Charters had some good fishing on Friday and Saturday of this past week between Effingham Island (Meares) and Cree Island . Chinook from the low teens to twenty-eight pounds were picked up using spoons and bait in 70 to 125 feet of water. Four inch coyote spoons in silver-glow and green and blue-nickel were working very well as was anchovy in the army truck glow teaser head and also the green Rhys Davis Teaser Head. We are expecting some great Chinook and Coho fishing in the Sound from mid July into mid September. 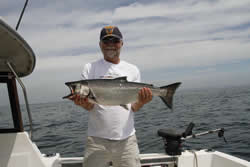 The offshore and inshore fishing for salmon and halibut has been very good to date out of Ucluelet. The Chinook have been predominately three year olds and are swimming to watersheds to the south. Three year old Chinook are usually fifteen to twenty pounds and this has been the case for the last two to three weeks with most of the landed salmon by sport anglers averaging eighteen to twenty pounds. There have also been some Chinook landed in the low to mid thirty pound range. A good percentage of the Chinook have been clipped and with such a large amount of three year olds the talk is spreading quickly about next year’s migratory four year old return to the southern watersheds of the Columbia River . Most of the usual hotspots outside the Ucluelet Harbor have been very good. The inner South Bank and outer area plus the south west corner have all been excellent for Chinook and halibut. The Red Can, Longbeach, and the Lighthouse Bank and of course the Big Bank have all had great fishing days. The bait on the various banks has been thick and the Chinook are gorging themselves on needle fish and big pilchards. Many guides and sport anglers are finding spoons from four to six inch in size working very well. The bigger spoons are attracting some of the bigger Chinook. Various plugs plus the brown turd and a couple of hootchies such as the T-Rex and the Clown have all been working well. Guide Wayne found that various green and blue colored needle fish hootchies were working well over the last few days on the South Bank. The Ucluelet Ladder Salmon Derby continues in July and August. The fish off with the top 50 fish will be the second weekend in September. Each month there are prizes of $5,000, $2,000, $1,000 and $500. Tickets per person are $10 and can be obtained in Ucluelet before fishing. The top 50 anglers with the top 50 weighed in fish will be fishing for a top prize of 20 to $25,000.