It is the first few days of fall and the summer seems already so long ago. The summer and for that matter the late and early spring was a great year for salmon fishing in this area. The Sockeye fishing was unbelievable and the Chinook fishing especially for migratory salmon as predicted, on the surf line of Barkley Sound and also the area of water just two to five miles off the coast of the jagged shorelines of Vancouver Island was phenomenal. The areas just out of the Ucluelet Harbor and areas just outside of Effingham Island located near the Broken Group of Barkley Sound are currently experiencing some fantastic Coho fishing. The Coho are currently split between hatchery and wild. Only hatchery Coho outside of a line (seaward) from Coaster Channel on a line across to Satellite Pass can be retained. Hatchery and Wild Coho inside this line can both be retained. We are expecting the Coho fishing to be reasonably good for the next two weeks in outside waters and also the inner waters of Barkley Sound. There are many reports that the Coho fishing as far as Kyoquot is very good and we are expecting these fish to swim by and for that matter many could be headed for the Stamp River . Summer of 2010 is over but the salmon fishing opportunities are not. 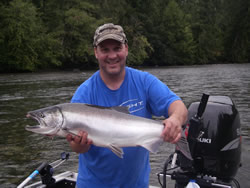 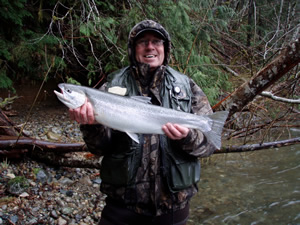 The Stamp River is the best sport fishing area close to Port Alberni . Good numbers of Chinook are entering the river which has great conditions for the salmon headed to their spawning grounds. The Department of Fisheries just recently released a number showing that close to six thousand Chinook that have swam through the Stamp Falls fish way counters and/or are already upstream from Stamp Falls . The average Chinook count entering the counter per day is currently 300. DFO is still predicting a return of 43,000 Robertson Creek Chinook to the terminal area.

With summer coming to a close so have the two big fishing derbies. The 39 th Port Alberni Salmon Festival ended on Labor Day Monday. The three days of fishing saw only a handful of fish come into the weigh station at Clutesi Haven Marina that were over thirty pounds. John Robertson of Parksville won the derby and the $10,000 grand prize with a 40.3 pound Chinook. The salmon was caught near Poett Nook in 55 feet of water using anchovy in a Pearl Teaser head. Shawn Hackwell was the only big Port Alberni winner as he won the biggest fish on the Saturday of the derby. Shawn’s fish weighed in at 32.4 pounds which won him $3,000 and also the Fred Duncan Memorial Trophy for being the Alberni resident with the biggest weighed in salmon. Derby numbers were down in not only participants but also fish caught. There were a total of only 1,600 anglers and only 701 fish were weighed in at the various weigh-in stations.

The weekend of September 11 th and 12 th was the final of the Ucluelet ladder derby. This derby lasted from May 24 th to September 3 rd . The top five derby entrants with the five biggest fish for each month were automatically included along with the summers other top 50 fish for the fish off in September. Colin Campbell won the derby with a 24 pound 6 ounce salmon. This fish won him $8,000 and another $2,000 in a fish charter prize. Colin’s guide was Ken Meyer.

This winning fish was only half the size of a couple of the qualifying fish that came in during late August. The biggest fish was just over 49 pounds with several more big fish in the mid to high forties. The weather in the open water for the derby was not very good and made for some difficult fishing. It is expected that this ladder fishing derby will once again occur next year and will be based out of Ucluelet. 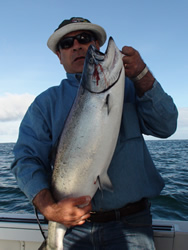 The September weather has not been terribly favorable for offshore fishing out of Ucluelet. On the days that have been good the water has been very flat with some great salmon fishing at the outer and inner South Bank. Coho have been generally found in the top 60 feet of water and a few bigger Chinook in the high teens and low twenties have also been in the same area. There are good numbers of Feeder Chinook close to the bottom between 120 and 145 feet. Some guides have had their best success using a T-Rex and a spatterback hootchie and also a hootchie known as “cotton candy”. The four inch watermelon and cop car coyote spoons have both done fairly well for guides and various sport fisher persons. The Coho fishing is expected to improve during the last week of September. There have been great reports of big Coho being landed to the north. These salmon should make their way down the coastline into the Ucluelet inner and outer waters and also the surf line areas of Barkley Sound.

Barkley Sound and the Port Alberni Inlet have generally been areas of hit and miss fishing since the beginning of September. The salmon just do not seem to want to hold in many of the local holding areas. Is seems as if the salmon are just making their way straight to the Somass river or other streams and creeks in the immediate area. We are hoping that current reports of some good Coho fishing at swale Rock and Pill Point in Barkley Sound are true. If the Coho come in bigger schools they just may hold as mentioned and make for some good fall fishing days. 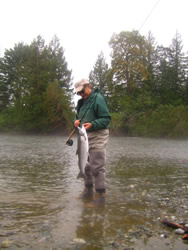 The Stamp River has had some great salmon fishing since early September. There is currently good numbers of Chinook and Coho in the Lower River . The Lower River is the area below “the bucket” and is an area that anglers can use bait which came into effect on September 15 th . Many anglers fishing with river guides aboard jet boats have hooked into as many as twelve to fifteen Coho per day. There have also been many good sized Chinook that anglers have hooked into. Many of these big Chinook have been released. Anglers can retain up to 2 Chinook per day in the river but only one can be over 77cm’s. Coho retention is also at two per day.

The best fly fishing for summer Steelhead usually begins after the 10 th of October. By this time there are plenty of salmon eggs floating in the river and river bottom which creates great Steelhead activity and excellent fly fishing for those avid fly fishers. We are expecting some great Stamp river fishing through until late November.