The fish in this photo were all landed very close to the Bamfield Harbor.Fishing can be very good during the late spring and all of the summer monthsalong the Bamfield Wall

The West Coast of Vancouver Island is a wonderful area to visit and spend valued time for many people worldwide when on vacation. Known for its unique settings and rugged coastlines, Vancouver Islands west coast also better known as the Pacific Rim, not only offers world class salmon fishing but also offers other adventures and unique cultural activities. The whole of Vancouver Island is located only twenty miles off of British Columbia’s mainland. On this vast island there exists a majestic geographical area of tall coniferous forests and breath-taking scenic views of rugged terrain and coastlines that have been battered by winter storms. There is also a display of wonderful exquisite and secluded white sandy beaches located in areas of pristine and calm water. Those visiting Vancouver Island during the late spring and summer months must take in not only a “fishing adventure” but also explore the great rainforests, beaches, and lakes. When fishing out in scenic Barkley Sound or offshore one can view wildlife and also whale watch. When on land and visiting the many local communities, visitors can seek out west coast culture, spa retreats, and of course take in some great west coast cuisine. 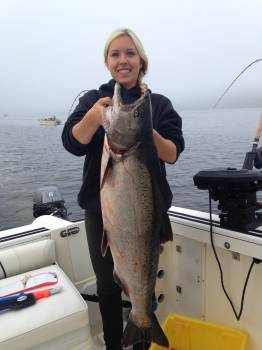 We are expecting the 2015 salmon season to be very good.Ashley landed this twenty-three pound Chinook in the Alberni Inlet usinganchovy in a green haze teaser head.

Vancouver Islands West Coast has had superb salmon fishing over the years. Salmon fishing in many of the so called “hot spots” has been nothing better than world class. The West Coast is also one of the only spots on Canada’s West Coast where one has opportunity of hooking into a twenty pound salmon twelve months of the year. Of course every year is not entirely the same because predicted run sizes returning to many of the natal rivers, creeks and streams to West Vancouver Island are not as good as other years. When fishing the Pacific Rim and many parts of Vancouver Island’s West Coast the opportunities for landing a Chinook or Coho salmon during the late spring or the summer months are very probable. In the Pacific Rim area we have the opportunity during these fair weather sport fishing months to target the vast quantities of migratory or transient salmon headed for the big watersheds to the south. The 2015 sport salmon fishing season is expected to be “Very” good on the west coast surf line and offshore. Scenic Barkley Sound during the months of June and July and the early part of August should be fabulous. The expectation of high numbers of transient salmon headed to distant southern watersheds is already looking fantastic. Salmon fishing around Ucluelet and a few areas of Barkley Sound has been successful for a few avid fishermen. A few Chinook salmon in the high teens and low twenties have been landed by guides and their guests and also sport anglers fishing in their private boats. Salmon fishing in Barkley Sound, along the surf line, and also offshore waters will continue from now through mid September or longer. There will be great opportunities to fish for Chinook and Coho in the waters of Barkley Sound during the months of May, June, and July. Coho salmon will become predominant in Barkley Sound in August and September with opportunity for Chinook in offshore waters. Look for another banner sport salmon fishing year on British Columbia’s West Coast —Vancouver Island. 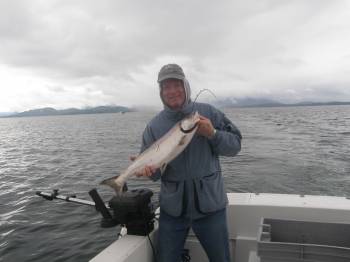 The month of April and May is often quiet in the Alberni Inlet except for those individuals fishing for prawns if and when the opportunity for this sport fishing is available. The Prawn fishing in the Alberni Inlet during the year when open has been very slow. Barkley Sound on the other hand has had some good areas for prawn fishing. Guide boats in the early spring often include in their salmon fishing trips to Barkley Sound, prawn fishing. Usually the prawn traps are dropped before fishing and then after fishing the traps are picked up to find the great prize coming up from the ocean floor. Barkley Sound fishing has been fairly consistent over the last few months although one would have to sum up the fishing as being very mediocre. When fishing for feeder or winter Chinook the rule is often where one finds bait there will be Chinook salmon. Swale Rock, Vernon Bay, and Alan Point have all produced some nice salmon in the eleven to fifteen pound range. Austin and Cree Island have also had the odd salmon up to twenty pounds. The Bamfield Wall and the Harbor Mouth have also produced some good salmon fishing. Some of the Chinook as of late have been clipped and the thought is that many of these Chinook are the early run of salmon migrating to rivers to the south. The salmon have been relatively deep from 85 to 150 feet. A variety of coyote spoons have been working. Green glow has been a favorite in the three and a half and four inch size as has the green and blue nickel. White spoons and white hootchies have also been on and off. Green glow, chartreuse, and purple glow hotspot flashers seem to be ideal when using spoons. Needle fish hootchies in army truck and mint tulip have also been working very well. Fishermen trolling with anchovy have had their best success using a chartreuse Rhys Davis teaser head with a six foot tail behind either a Chartreuse or green glow hotspot flasher. There are a good number of undersize salmon so at times it is best to fish with spoons, needlefish and hootchies. 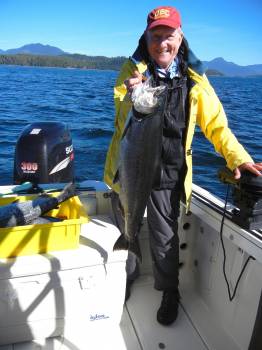 We are expecting the fishing during June and July to be terrific. The mid- summer run of Chinook and Coho which are migrating to the big southerly watersheds historically begins in mid June and runs into mid July followed by the fall or “late run” with expected large numbers of these transient salmon headed to the Columbia, Sacremento, and Willamette systems to the south. Many of the salmon migrating down the Vancouver Island West Coast are forecasted to be four and five year olds which often means some good sized Chinook over thirty pounds. The surf line areas of Barkley Sound and out to offshore area at three to seven miles should have some great fishing as the rich resources of bait fish come into these areas which bring in the bigger Chinook.

Ucluelet is one of those spots where it is possible to land a twenty pound salmon every month of the year. Of course weather plays an important role in terms of getting out onto the water. During the winter months it seems there are breaks in the weather patterns which make it possible for keen anglers to get out on the water. Some nice quality fish up to twenty pounds have been landed during the latter part of March and the month of April. The Chinook have been feeding on sand lance and needle fish. Great Bear has been relatively good. The Alley, Forbes, Sail Rock and Beg Island have all produced some nice feeder Chinook. Most of the feeders are averaging seven to twelve pounds. With the weather pattern changing and becoming more favorable over the last few weeks guided trips and sports anglers have been periodically able to get further offshore. April 17th to 20th were wonderful days on the Pacific with no wind and little swell. The Inner South Bank as example was perfect with some feeder Chinook and halibut sitting on the bottom feeding on sand lance and needle fish. Sport Fishermen and a few guided trips have at times had some great fishing with a few Chinook weighing up to seventeen and eighteen pounds. As mentioned the Inner South has been most favorable for those fishing close to the bottom at 135 to 150 feet. Some fisher people have had success using purple haze and army truck glow hootchies. However the white Turd and the T-Rex hootchie have been very good for some sport fishermen with both of these lures producing the best catches. The past few weeks has also produced some of the first halibut of the season. The five mile (inside south) and the seven mile (outside south) for those offshore have produced relatively well. Halibut fishing has been best on the ebb tides and using a spreader bar with six inch white grubs. The Halis have been migrating back to the deep after their spawn and by the third week of May will have migrated back to the shallows. The white turd for three sport anglers was good for two perfect sized halibut while fishing the Inner South. May, June, and July should prove to be three very good fishing months with some nice Coho coming into the mix in late June when the big migratory flow of the mid-summer run begins. Look for some salmon in the mid to high thirties this summer. 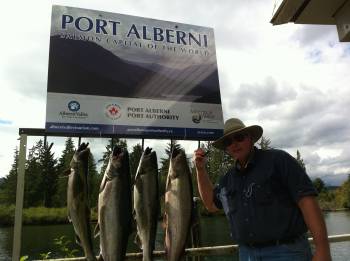 Bradley from Blaine Washington did very well fishing with a friend in the Alberni Inlet when fishing for Chinook.   Guide was John and Mel of Slivers Charters Salmon Sport Fishing.  These fish were landed using coyote spoons and white and green hootchies

The winter Steelhead season is all but over. Many of the spawned out fish are heading back down the river and making their way out to the waters of the vast Pacific. The Fall of 2015 is once expected to be very good with plenty of early Coho and summer Steelhead in the mix. Those keen on fly fishing should look at booking trips from the 10th of October into the first ten days of November.