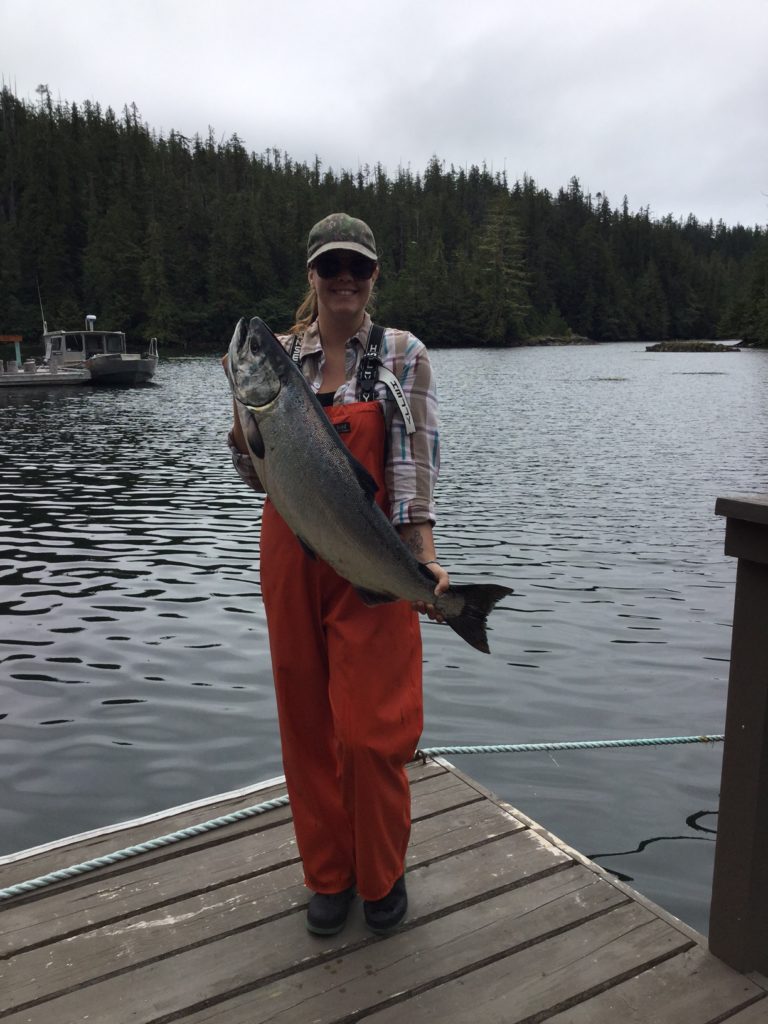 April 4th 2017
The spring and summer salmon sport fishing season for 2017 is closing in on us ever so rapidly. March on the Vancouver Island’s West Coast has been a rather wintery month with a lot of snow, especially in higher elevations, and below seasonal average temperatures. We are now turning the calendar over to April which is very much a welcoming thought. April on the rugged but scenic West Coast coastline is most often looked at by a variety of sport anglers as the true beginning of saltwater fishing opportunities. The last two summer sport fishing seasons for Chinook and Coho outside the protected harbors of Ucluelet and Tofino, along the surfline of beautiful Barkley Sound, and also the protected waters of the Sound itself were relatively good in terms of salmon fishing. The 2017 season according to the many indicators in pre-season forecasts are predicting that the current years fishing opportunities for salmon along West Coast Vancouver Island will be what can be termed average sport fishing in May, June, and July and better than average opportunities in August and September. Many of the indicators in the preseason forecasts expect that returns to the Columbia River and Puget will be relatively good. With this in mind those returning fish do stop on the various banks outside of Ucluelet and Barkley Sound and of course also migrate into the various Barkley Sound areas and feed on the rich resources of bait fish. Of course as the summer movers into July and August returns of migrating Coho salmon really adds to sport fishing opportunities. The big migratory return of salmon normally arrives in three large waves. They are termed as being early summer, mid-summer and late summer runs. The early summer run often begins in April off the west coast of Vancouver Island and continues into June and creates some early fishing very tight to Ucluelet, Tofino and the pristine waters of Barkley Sound. The transient salmon feed aggressively on the rich resources of bait fish as they make their long journey to their natal streams. The late summer run in late July and running through August and early September usually produces for avid anglers some beautiful Tyee in the high thirty pound range. 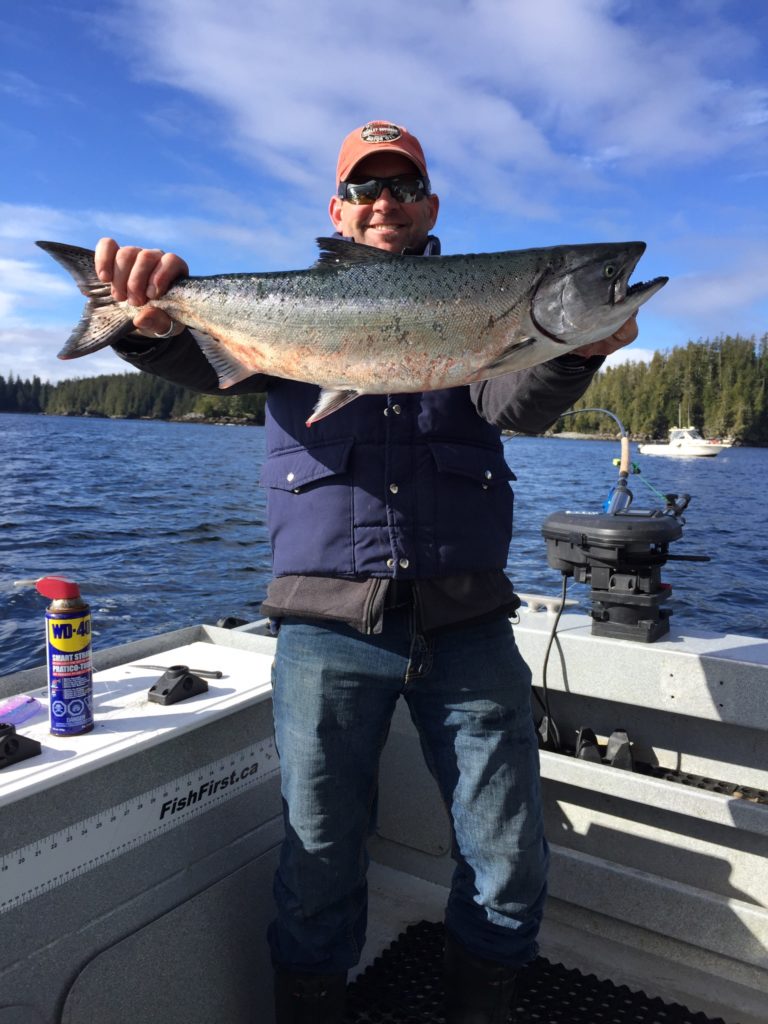 Winter Chinook landed during the Sproat Loggers Derby in March. This fish hit a Kitchen Sink–a three and a half inch in the Vernon Bay Area. Fishing with Blair from Bamfield.

West Coast Vancouver Island pre season forecasts for Chinook and Coho are looking relatively good. Good returns of Chinook in the four and five year old class are forecast in 2017 which means there will be some very nice salmon in the high twenty to mid thirty pound range. The Chinook often begin to show the first week of August in the Port Alberni Inlet and actually peak in the third or fourth week of the month. The Coho follow the Chinook and begin showing in the later part of August and continue well into September. Chinook returning to West Coast Vancouver Island are often showing up in Barkley Sound in the second half of July. The salmon come in close to the surf line and feed heavily on bait fish in the waters of Barkley Sound. Barkley Sound and the Alberni Inlet should have a fantastic sport fishery during the summer of 2017 for those who enjoy fishing in calm, pristine and relatively scenic water. Anglers world-wide will be treated to some world class salmon fishing along Vancouver Islands West Coast and Inlet areas. The Port Alberni Inlet, the inshore and offshore water of Ucluelet and Tofino and Barkley Sound will be all fantastic areas for sport fishing in those so called “hotspots” in 2017. 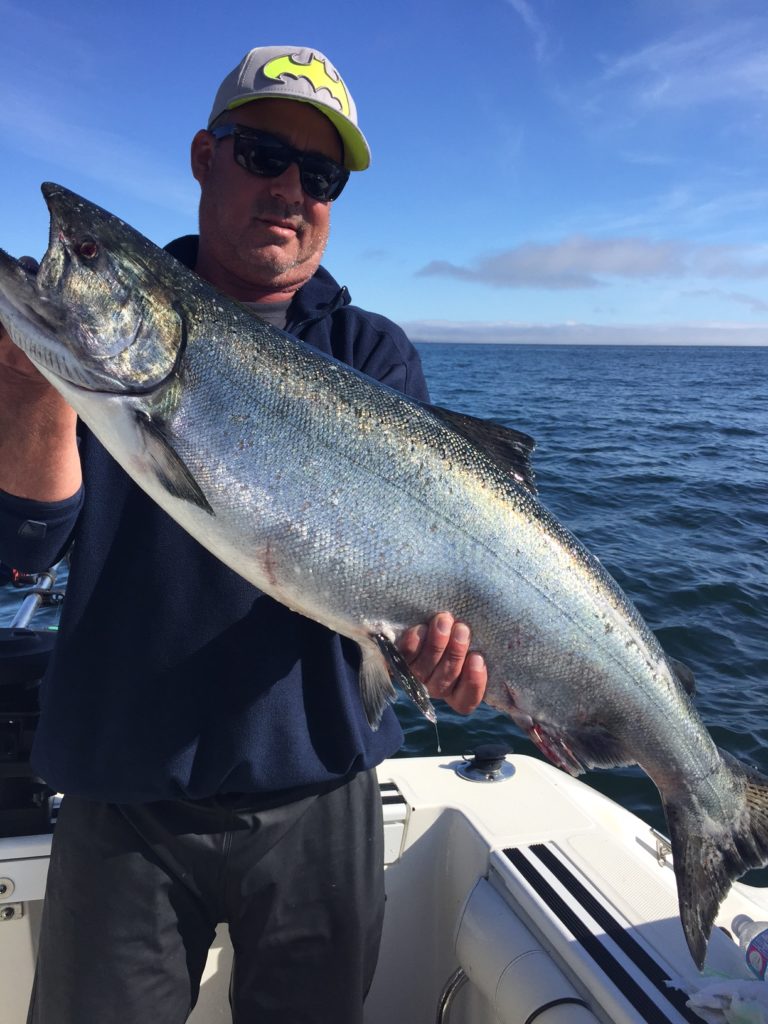 Summer fishing in 2016 was excellent in Barkley Sound. Mile of Calgary Alberta land this fish using anchovy. We are hoping 2017 is as good for Chinook and Coho

Barkley Sound has recently provided some great winter Chinook fishing. The fishing in the Sound has been quite good through the full month of March. The Sproat Loggers Derby occurred during the first weekend of the month and produced some nice feeder Chinook up to TWENTY pounds. Local angler Morgan Steede had the winning salmon which weighed in at Twenty and a half pounds. Morgan won a fantastic prize dontated by Port Boat House which was a Yamaha Power Washer. Wayne Crossfield finished second landing a sixteen and a half pound Chinook. Gone fishing donated a Scottie Prawn Puller and two traps. Third place went to Brent Rose another local angler who landed a fifteen plus pound Chinook at Sandord using needle fish. Brent won an Islander Reel donated by JW Berry Trucking. Derby organizer Don Deforest was very happy with the weekend. Don remarked that “The overall weather was great and many anglers landed some nice feeder Chinook”. This was the derby’s twenty-ninth year and four hundred and seventy-seven entrants participated. In 1988, the derby’s first year, forty fishermen joined Don in that first winter derby. Don described the fishing for himself as “quite good”. Even though he did not win one of the top three derby prizes he landed four or five very nice Winter Chinook using anchovy in a chartreuse Rhys Davis Teaser Head. In early March and April anchovy often seem to work very well. Needle fish hootchies in blue and green, silver hordes, and a variety of small three and a half and four inch spoons also work well. All of these favorite lures were definitely working well in the derby and also throughout the full month of March. The best Winter Chinook fishing in the Sound has been along the Bamfield Wall, the Whistle Bouy, Vernon Bay, the Bamfield side of Fleming Island and Sanford, and the “Back Door”. The salmon have been in one hundred and thirty to one hundred and eighty and even up to two hundred feet of water with the bigger fish in the deeper water. Fish have been coming in daily feeding heavily during the herring spawn. The best fishing has occurred between tides as of late. April should really turn on as residential fish will continue to be in the area and the first of the migratory salmon should begin to show as they make their way to the southerly watersheds in the Pacific North West. Look for fantastic fishing from May through September. Always carry bait and ones favorite summer spoons and hootchies. As the summer moves on switch to bigger spoons but also remember to adjust to the size of the bait. 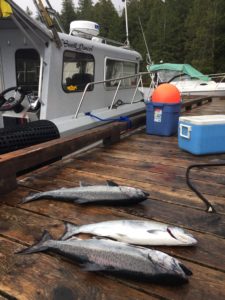 The offshore and inshore fishing during the spring is often very good around a variety of areas in the Ucluelet and Tofino areas. As the herring spawn approaches in mid to late March the local Chinook or more commonly known as feeder or winter Chinook move close to the beach and are abundant in local areas such as Great Bear, Mara Rock, Sail Rock, Forbes, the Alley and Beg Island. Over the last few weeks it is these spots that have been quite good for the local sport fishermen and guides. Small three and three and a half inch coyote spoons in army truck, chartreuse, glow green and knight rider have been working in deeper water from 90 to 160 feet. Also a variety of regular octopus hootchies and needle fish hootchies are working quite well behind green glow and purple haze flashers. It is important to find the bait which is becoming more abundant. Those out on the water will do relatively well when finding the bait balls. This past three weeks Vancouver Islands west coast has had some good fishing for a few local guides and avid fishermen. Great Bear had some good sized bait balls and some good sized feeders up to sixteen pounds. Needlefish hootchies and the three and a half inch green glow coyote spoon were working very well and should be two items in ones tackle box over the next few weeks. This summer’s fishing is expected to be very good as migrating salmon make their way to the big watersheds to the south. Chinook beginning in the middle of April and continuing through August will swim right outside the Ucluelet Harbor and will feed out on the various sandy banks before continuing their long journey. Coho salmon should also be in good numbers and will add variety for many sport fishermen those guests on many guide boats. The summer of 2017 should definitely be a time when all fisher persons will have an opportunity to land a salmon.