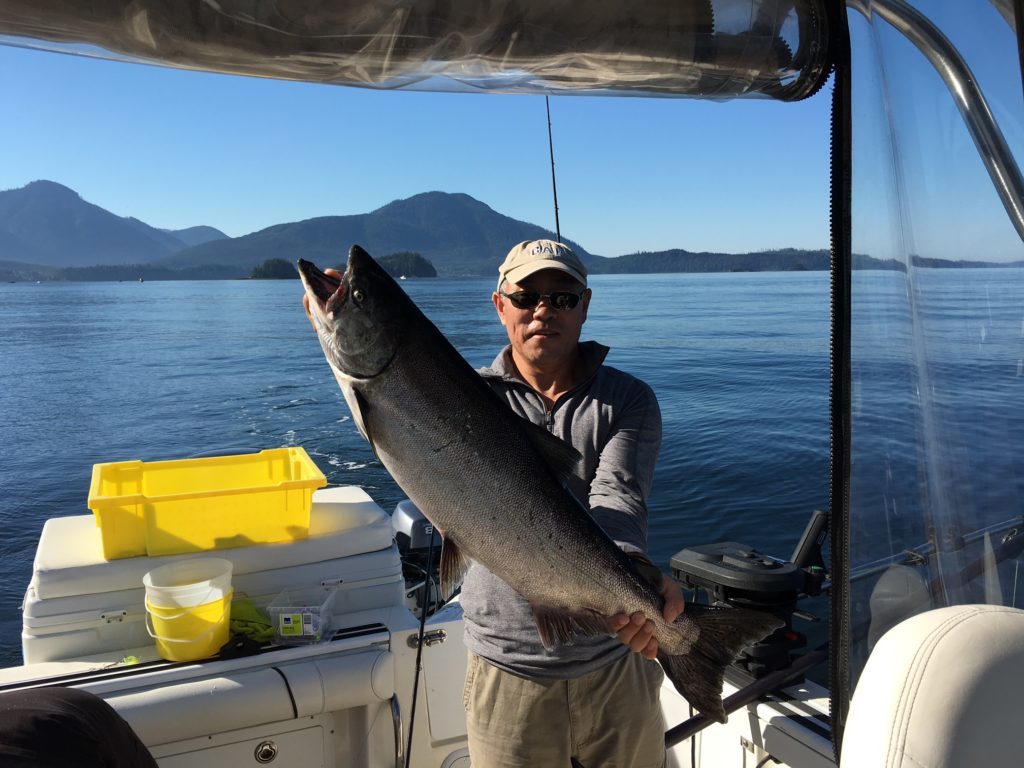 July is a wonderful month for sport fishing in the Alberni Inlet and Barkley sound. The area begins to fill with travelers and various anglers world-wide. The Alberni Inlet was to be an area where perhaps during July there would be a lack of fishing opportunity. Sockeye Salmon numbers returning to the Somass River were forecast to be very low. However the numbers are much more than what was thought and on the FIRST of JULY Sport Sockeye Salmon fishing opened. The early results have been phenomenal with many anglers limiting. The current bag limit per person per day is two salmon. On Saturday the 8th OF JULY the Limit for sport ANGLERS will be FOUR per day. That number could change. Over the next few days there will be a variety of test fishing which may indicate a new run size. With the current environmental conditions Sockeye Sport fishing should continue in late July. There is still plenty of snow in the mountains which has created a fairly steady flow of cool water which attracts the Sockeye to the River. How-ever the area has had several days with air temperatures over thirty degrees celsisus. These higher temperatures have helped the temperature of the river water and the inlet water rise substantially. With this the Sockeye are slowing their migration down and are schooling out in the inlet.

Barkley Sound has had some fairly good Chinook fishing in May and especially the last two weeks of June. The “early” and mid- summer run of migratory Chinook headed to the big watersheds to the south have been relatively decent. Barkley Sound has had ample amounts of rich nutrient bait fish which are bringing the salmon in from offshore waters to feed. The surf line areas and inshore areas along the Bamfield Wall, Austin and Cree Island and Swale Rock are excellent locations for some of those chrome Chinook which are make their long journey to their natal rivers and streams. There have also been a good number of Coho up to seven pounds in many of the areas. 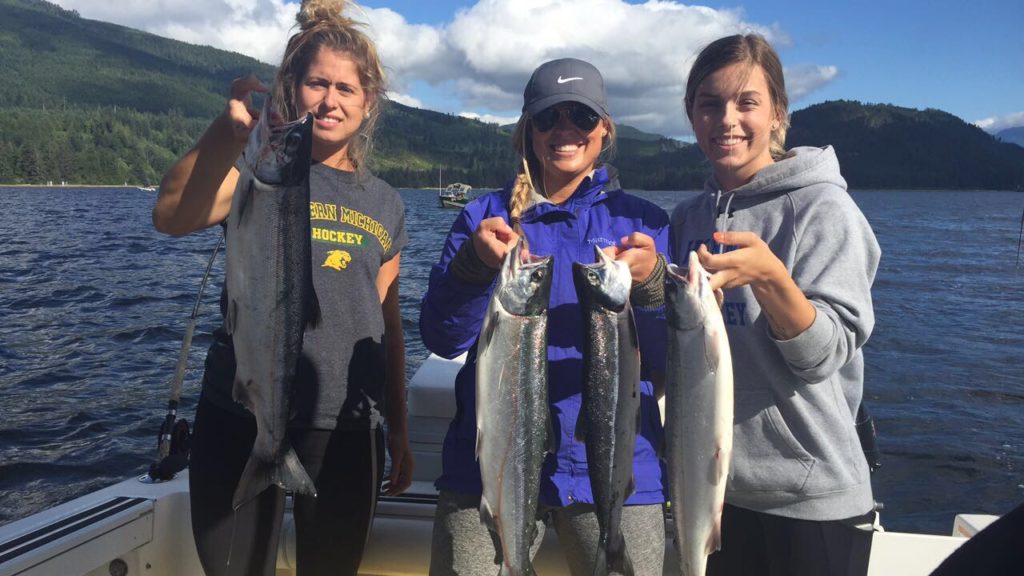 Anglers have the best opportunity to land Sockeye when they school in big numbers. This historically occurs when the water temperature in the Somass River and Alberni Inlet hits eighteen degrees Celsius. The Sockeye school from Cous Creek out to the Nahmint Franklin area. With the projected outlook for Sockeye returns to the Somass River being really unknown until there is more data there should be a fantastic opportunity for some tremendous Sockeye fishing. On July 1st Sockeye fishing opened in the tidal waters of the inlet. The retention is currently at two Sockeye Salmon per person per day with a two day limit of four per person.

The Sockeye in the Alberni Inlet are currently sitting in thirty-five to fifty feet of water and as the water warms they will swim down into deeper and cooler water. Sockeye hit short leader lengths from eighteen to twenty-five inches in length behind a variety of hotspot flashers. The mp2, mp15, pink and blue, pink and black, and the pink with either the green or white head hootchies all seem to work very well for most sport anglers. Sockeye are attracted to the boat by color. Many sport fishermen will often have eight flashers behind their boat. Four are often dummy flashers and the other four with hootchies of choice. The Sockeye will average four to eight pounds. Sockeye are the number one commercial salmon. They are wonderful for summer barbeques and when vacuum packed properly last the winter for those special occasions.

Sockeye fishing is a wonderful fishing opportunity for the whole family. It is a fun fishery for young and old. Don’t miss out on this opportunity in the Alberni Inlet this July and early August. 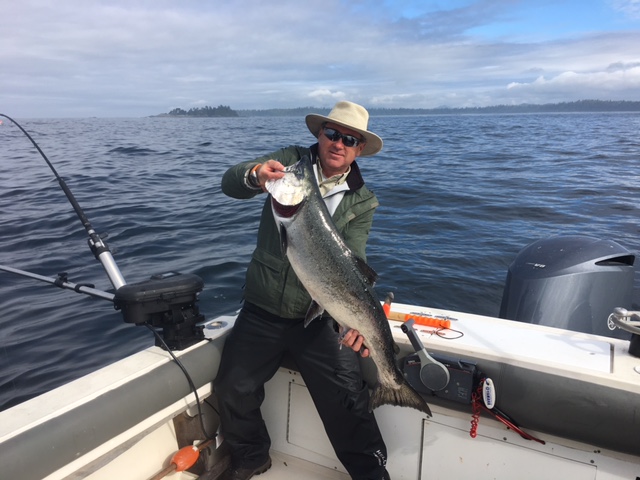 The salmon fishing in Barkley Sound has been relatively inconsistent. The best fishing has been out on surf line areas. The islands close to the Ucluelet Harbor Mouth, Meares, Austin, Cree Island, Kirby Point, Edward King and the Bamfield Wall have all had times during the past few weeks with some hot Chinook and Coho sport fishing. Areas close to the Ucluelet Harbor that have had a few fantastic fishing days are Great Bear and Sail Rock. The inner and outer South bank and Long Beach have had some of the transient salmon linger creating some good sport salmon fishing opportunity. Florencia and Way Point have been two hotspots as of late. The salmon in the Sound and inside waters have been hitting anchovy in green glow, army truck, and green haze Rhys Davis Teaser Heads. Needle fish hootchies and hootchies in green (spatterback), blue and white have worked well. Small Coho Killer spoons in the cookies and cream and white pearl have been working very well. A few guides have done very well with the army truck glow hootchie and the cuttlefish J-79. The Sonora cuttlefish, Jack Smith, and Blue Meaney Hootchies have been very good out on the banks. Anchovy and a variety of four and five inch coyote spoons have also been working. We are looking forward to some great sport fishing opportunities during the second half of July and August in Barkley Sound, the Alberni Inlet and offshore. The numbers of transient Chinook and Coho headed to the big watersheds to the south are forecast to be average which should provide some very excellent sport salmon fishing. 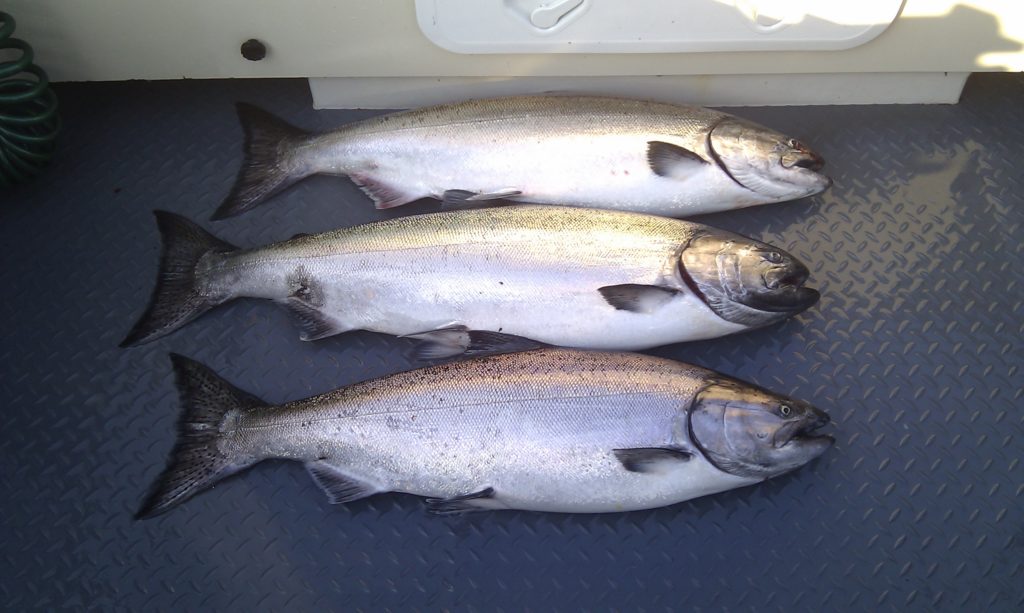 Three nice Chinook in boat before 7 am