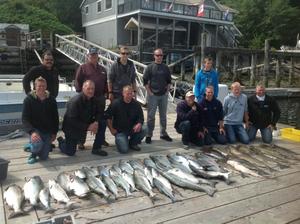 The 2013 summer conditions for sport fishing and for, that matter,

most outdoor activities on the west coast of Vancouver Island have

been more than ideal.  Bright sunny and very warm days have been

persistent since the first day of July.  There has been less than normal

precipitation, winds off the coast have been definitely persistent for the

have been more than ideal.  Ideal conditions for sport fishing are

forecast to be very similar for much of the rest of this summer.

been very consistent since early June.  The majestic months of summer

Rim region seems to be getting better and better.  Large schools

watersheds to the south.  Local Vancouver Island salmon will begin to

appear in coastal waters very soon.  With August now here we should

on Vancouver Islands’ west coast.  This should also be true in many

of the inshore areas of Barkley Sound.  The salmon fishing on the surf

areas from both Bamfield and Ucluelet have been extremely good.  The

Chinook and Coho are getting larger.  The Coho since early June are

Barkley Sound.  We are expecting a great August and September for

well above average.  The sport fishing will be very good with lots of fun

and excitement for all. 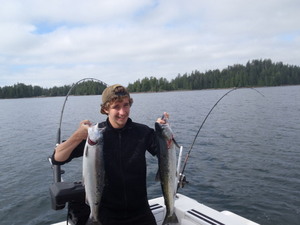 Currently there is very little fishing in the Alberni Inlet.  A few

attempting to land the last of the straggling Sockeye.  July produced

was downsized to 300,000 pieces.  Currently one hundred and ninety

thousand pieces have moved through the fish ways.  Great Central

Lake has currently eighty-four thousand and Sproat Lake one hundred

and six thousand.  With the forecasted run size there should be an

boats near the last week of August.  The 2010 Coho brood stock

expected to be well above average.  The Coho returning to the Somass

Coho Derby and the first ten days of September.  Coho usually like a

true, then the sport fishing opportunity will be fantastic by month’s 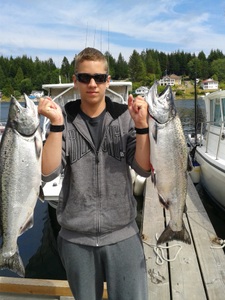 Barkley Sound Salmon fishing has been very consistent since late

May and early June.   The sound, during most of the summer months

has been loaded with vast amounts of bait fish in small herring,

sardines, and anchovy.  The migration of Chinook and also Coho has

been quite good.   These migrating salmon are headed to the

and heavily fed on the rich resources of food for the transient fish.

inshore areas.  Chinook and Coho numbers have been good numbers

for most of the summer.  Most of the Chinook have been in the mid to

pound range.  The Coho have been in good numbers since very late

June and early July.  The Coho are really putting on weight as they are

fifteen pounds.  Currently the best fishing has been at many of the surf

Austin have all been consistently good.  The change of tide really seems

to put a push on for feeding salmon.  Either side of the tide by an hour

seems to create a good bite.  Anchovy is definitely a good idea to have

aboard ones sport boat.  Anchovy in green, chartreuse, green haze, and

even at time purple haze are all working well.   Hot Spot green flashers

in plain or glow green or glow chartreuse are a good bet.  Later in the

bait size does play a huge role.  If the bait fish in the area one is fishing

are best.  The Coho are in water from twenty feet and down to seventy

feet.   With a lot of WCVI fish beginning to now appear in Barkley Sound

locations it is important that any Chinook salmon greater than seventyseven cm be put back into the water.  Barbless hooks are essential and

a measuring tape should be close at hand.  Check all boundary

locations for Coho and Chinook.  In most areas of the sound Coho

salmon retention levels in August and September will be four per

person.  It is important to check all boundary locations however.

offshore fishing conditions have been quite outstanding and better

than average.   There have been a few foggy mornings with fog banks

have been quite the opposite.  Ocean conditions have been excellent

afternoons which have made many mornings almost perfect on the

water.  The Chinook salmon offshore on the banks outside Ucluelet and

also Bamfield located on the opposite shoreline have been very

plentiful and are averaging in weight from the mid to high teens.  There

have been some good Chinook in the mid twenty pound range.  In

Chinook salmon in the ten to fourteen pound range.  The fish out on

the banks are transient and do come in waves during the summer.

These migrating salmon are often classified as early summer, mid-

their long journey to their natal streams.  Some of these late but bigger

been at the fourteen mile off Cape Beale.  To date there have not been

a lot of Coho out on the banks.   The Coho have been abundant

Barkley Sound.  The Chinook salmon on the inner and outer South Bank

and also the Big Bank, Rats Nose and other offshore locations have

been swimming at the eighty to one hundred and forty foot depths.  A

variety of hootchies and spoons have been working for many sport

fishermen.  The brown and white turd and the light green spatterback

cuttlefish have been great producers for offshore salmon .  Trolling

hotspot flasher seems to work well offshore.  The five and six and

we get into mid August and also the latter part of the month.

We are expecting some great fishing well into September in the

Port Alberni Inlet locations.   The Alberni Valley will be hosting the

be for Coho only.  Look for more information during the weeks to come