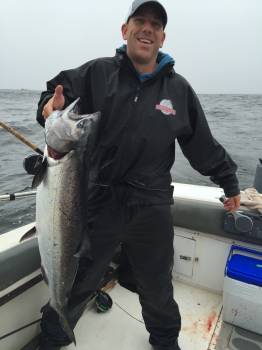 Cody landed this Chinook salmon fishing with Terry of Slivers Charters Salmon Sport Fishing. This fish hit a green spatterback mini turd on the turtle head outside the Ucluelet Harbour.

Salmon fishing in the Alberni Inlet, Barkley Sound, and offshore Ucluelet has been very good over the past several days. Migratory salmon headed to the big watersheds to the south continue to fill the many popular banks in offshore areas. Chinook and Coho are beginning to migrate into local West Coast Vancouver Island regions as they wait to enter their natal streams and rivers. There has been some fabulous sport salmon fishing this summer. Sockeye salmon fishing in the Alberni Inlet began in late May and continued well into August. The Inlet now has a tremendous number of returning Somass Chinook and Coho. Barkley Sound also has had some great salmon sport fishing in many areas.

The West Coast of Vancouver Island continues to be very warm and dry. With the return of big numbers of Chinook, Sockeye, and Coho too many creeks, streams, and rivers in the Pacific Rim there is a need for some much needed precipitation. Sockeye returns to the Somass River System are very close to a record two million pieces return. Approximately three hundred and seventy-five thousand have returned to two local lakes where the Sockeye will sit until the rains occur in the fall and fill local streams and creeks where these valuable salmon will naturally spawn. Large numbers of Chinook and Coho are now migrating through Barkley Sound and into the Alberni Inlet where a fantastic Sport fishery is occurring. Barkley Sound hotspot sport fishing areas such as Swale Rock, Pill Point and the Bamfield Wall have been excellent as the salmon make their way on their long migration. 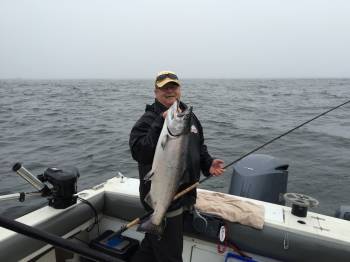 For almost ten days many sport salmon fishermen have enjoyed some very good Chinook salmon fishing in the Alberni Inlet. The return of Chinook to the Somass River system is predominately three year olds. With this in mind the current rule in the Alberni Inlet and all of Barkley Sound is that Chinook salmon must be 77 cm or less to be retained. This means that Chinook salmon weighing approximately fifteen pounds or under can be landed and tagged on fishing licenses. Many of the Chinook in the system are coming in at this weight and obviously must be measured by sport fisher persons. The daily retention of Chinook is two and the daily retention of Coho salmon remains at four. Possession per day per individual is four salmon no matter what the species.

The Alberni Inlet sport Chinook fishing has been very good for over a week . Currently there is good numbers of Chinook from Coulson Mill out to Dunsmuir Point. There has also been some great fishing in Underwood, The Narrows and Bells Bay. Coho salmon are now also coming into the mix and should begin to show in bigger numbers as we get closer to September. The Chinook are not sitting in deep water. Those sport fisher persons having some great success have been landing salmon sitting in thirty-five to fifty feet of water. The salmon are hitting the usual O-15 and 16 hootchies plus the mp 15, 2, and 16 lures. The AORL 12, dark green spatterback, and army truck are also working for some. Those using anchovy seem to be having the best success. Rhys Davis Teaser Heads in glow army truck, green haze and purple haze are working very well. The Chinook to this date have been very bright and fresh and are responding to leader lengths up to six feet behind glow chartreuse and green hotspot flashers. Coho are also hitting anchovy and also a variety of bright hootchies and spoons. 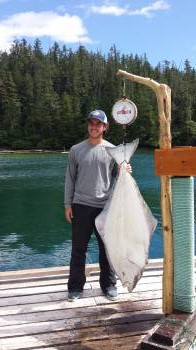 Great Halibut  landed by Chriss from Calgary who fished with his Dad out of Lodge.  Halibut was landed using a spreader bar.

The salmon fishing in Barkley Sound for Chinook under 77cm’s and Coho has been quite consistent. Many of these salmon will make their way into Alberni Inlet waters which will thrive on some continued good fishing opportunities into September. The hotspots in Barkley Sound have been the Bamfield Wall, Wittlestone, Swale Rock, and Pill Point. Most of the salmon in these areas are returning to Pacific Rim Rivers and streams and are not in deep water. A variety of hootchies and spoons have been working but anchovy again seems to create the best success for sport fisher persons. The green haze, bloody nose, and army truck Rhys Davis Teaser heads are working very well. The salmon also seem to be holding in those areas that have bait fish in good numbers. The Coho are still putting on a pound a week and will actively feed throughout the day. Finding bait in the sound is often essential. With the many creeks, streams and rivers found in Barkley Sound and with the lack of water in these vital waterways the salmon will sit in Barkley sound actively feeding until the waterways fill with water. 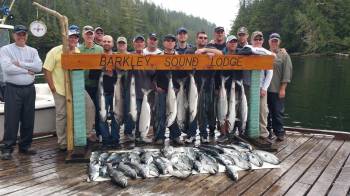 This group fished with Slivers Charters Salmon Sport Fishing out of Barkley Sound Lodge in Cigarette Cove. The group fished for two days eith most of the individuals coming from Washington State, Utah, California and Ohio.   The group had six guides.  These salmon were landed on the last day of fishing.  Day one of fishing was also very good.

The fishing out on the offshore banks has been very good all summer. The late summer run of Chinook and Coho headed to the Sacremento and Columbia River systems continues. In the mix is also Chinook and Coho Salmon headed to the Fraser, Vedder and Harrison Rivers. South Bank areas and the Big Bank have had some great fishing opportunities. The Chinook are deeper and have been sitting from eighty feet to the bottom or sand. Coho salmon are much shallower. Five and six inch spoons and plugs with or without flashers have been working very well. The mini green spatter back and white glow mini turd have also been fantastic for both Chinook and Coho salmon. The fishing offshore often continues well into September as salmon continue their long migratory journey.