The days are becoming longer and brighter and we are now on the upside for what is expected to be a fascinating 2010 summer saltwater fishing season on the west coast and central area of Vancouver Island, British Columbia. This is not saying that the only time to fish for salmon is during the summer and fall. This area offers 12 months of salt water salmon fishing. Beautiful Barkley Sound has waters that are protected during west coast storms which shut down any surf line or offshore fishing opportunities. This is not to say that there are not still some great November, December and January days on the Pacific Ocean with opportunities to land a feeder Chinook salmon up to twenty pounds. February offers some warmer afternoon temperatures on the West Coast and also arouses many avid ocean anglers that the summer is fast approaching and summer plans should be made.

Pre Season forecasts for the summer of 2010 are very encouraging with predictions that the fishing in June, July and early August on the West Coast and areas of Barkley Sound will be even better than in 2009. Oregon fish and wildlife has announced that the early spring run of Chinook set to return to the Columbia River and its immediate tributaries could be as high as 470,000. This means that these fish will begin to appear around Barkley Sound and the Ucluelet area in May and should peak sometime in June. Most of these fish swim relatively close to the nutrient rich waters of Vancouver Island’s outer coastline and feed hard for long periods of the day as they near the end of their life cycle. By mid June the mid-summer migratory flow of Chinook and the first Coho begin to show and also feed on herring, needlefish, squid, and pacific sardines. Chinook pre season forecast returns according to a Seattle Times report are close to 700,000 pieces. These salmon will peak sometime from mid July into early August. Anglers fishing for the earlier fish should have plenty of anchovy and various Rhys colors of Rhys Davis anchovy Teaser Heads. Needlefish hootchies and needlefish style spoons are also a must.

There are many indicators in relation to pre season forecasts. One indicator is the return of premature salmon to their home rivers, creeks and streams. These premature salmon known as Jacks are predominately males. The Jack return to the Columbia in 2009 was 80,000 to 100,000 pieces. This return was the highest on record since 1938. With other factors including better than normal ocean conditions and high ocean survival the Salmon Fishing in 2010 along Vancouver Island’s West Coast and in the pristine waters of scenic Barkley Sound should be absolutely phenomenal in the summer of 2010.

The Port Alberni Inlet is relatively quiet during the winter for any type of salmon fishing. Often in late January and into February bait fish will come in big numbers to the Franklin-Nahmint area which often brings up feeder Chinook feeding on the rich bait resources. There 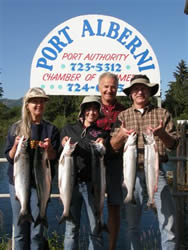 have been a few good reports of winter Chinook being landed in the area and also around China Creek where there have been some huge bait balls. The summer fishing in the Inlet should be wonderful. We are looking forward to a very good Sockeye salmon sport fishing season. Numbers last year were by no means a record in terms of returns but the dismal 250,000 in pre-season forecasts in 2009 multiplied to well over 500,000 which paved the way for one of the best sockeye seasons in the Inlet since 2006. The 2010 season will not see record returns but Sockeye returning to the Somass system should be very similar to last summer. Chinook and Coho returns to Robertson Creek which show in the Port Alberni Inlet by mid August have not had any preliminary forecasts but information should be made available relatively soon. The Inlet is also a great area for sport prawning. At the moment this is closed and is due to re-open at the beginning of April. 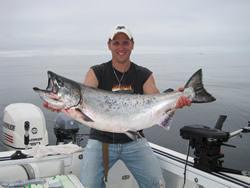 Winter Chinook fishing in Barkley Sound has been very good for those venturing down the Inlet on some of the many spectacular winter days that we have had. The Canoe Pass, Swale Rock area has produced some nice feeder Chinook from seven to thirteen pounds and great reports have been received out of the Bamfield Harbor all the way down to Sarita Bay. Winter Chinook can always be found where there is bait and all of the areas mentioned have had some good sized bait balls. The Winter Chinook are found in deeper water often up to 130 feet and can often be in the high teens and low twenties. Anchovy, green coyote spoons and often blue-green hootchies work very well for feeders.

The Herring spawn often brings in big number of feeders from offshore. The herring begin moving toward the beach and into Barkley Sound from the last 10 days of February and into mid-March. The Sproat Lake Loggers Derby is occurring this year during the weekend of March 6 th and 7 th which should produce some very excellent fishing opportunities for those competing in the derby. Our trips to Barkley Sound also include some great prawn fishing during the winter and early spring.

Ucluelet is located on the extreme west coast of Vancouver Island, British Columbia. Known for its summer fishing popularity the summer time 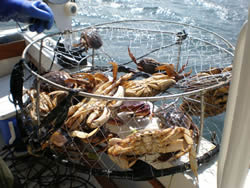 population of this relatively small B.C. west coast town explodes. Ucluelet is not the resort area that Tofino, which is forty-five minutes away, is. However this tiny west coast town does provide various wonderful accommodation locations that can be classified as five-star. Fishing in the winter for feeder Chinook often occurs very close to the Ucluelet Harbor. The last few weeks has produced some very good fishing at the mouth of the harbor, the red can, Mara Rock and the lighthouse. The winter Chinook have been averaging in weight from 10 to 12 pounds. Needlefish hootchies, green and green-glow coyote spoons and anchovy in chartreuse colored teaser heads have been working well. The fishing should by recent reports up and down the west coast of Vancouver Island continue to be good right through the summer. Northern portions of the island are already reporting that the summers’ migratory fish have already shown. Some of these fish are averaging 14 to 23 pounds and are destined for the Columbia River.

This spring we will continue to provide opportunities with our “Seafood Safari”.

This is a great family opportunity on the open Pacific where guests have opportunity to fish for salmon, bottom fish, prawns, crab and perhaps pick a few wonderful oysters. Halibut fishing usually begins by the 24 th of May when they make their way from deep water to the shallows.

The Stamp River is often considered the best winter and summer Steelhead River in the province of British Columbia. Winter Steelhead arrive to their natal river from December through March and often peak in mid-February to the latter half of the month. One guide has been quoted as saying that “the peak of the season is the day that the largest school enters the river”. 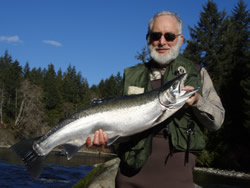 The Winter Steelhead fishing in the Stamp this year has been one of the best seasons since 2006-2007. There have been some days because of poor weather that has made it impossible to fish. In fact there were five or six days in January that the monsoons created a bit of havoc and the water was moving too quickly and was way too high. However when one considers approximately 150 winter Steelhead fishing days during the winter season there probably will be a few bad days. One could say that that over the last couple of years there has been better than normal ocean conditions and the survival rate of the fish in the vast areas of the North Pacific have been very good. In the fall of 2009 the Stamp had a Coho return of well over 70,000 pieces. Coho and Steelhead share the same life cycle. Returns of winter Steelhead this winter are comparable to the Coho return with predictions that the next year or two will be very similar. We are hoping that all of the ocean survival theories are correct.

The last few days have been fairly good on the Stamp. Some of the fish we have landed aboard jet boats have had sea lice which means fresh fish are still 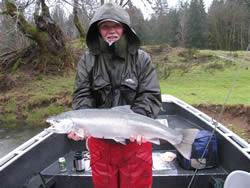 entering the system. Often fresh fish will continue into late February. Both the upper and lower portions of the Stamp are producing. Some fish have moved through the falls. Bait is still the ticket in the Lower River below “the bucket”. The Steelhead in the lower have been taking roe and roe bags. If fishing in the upper portions of the Stamp, jigs, plugs, worms, and gooey bobs are working well.

If fishing along the banks is your style then the area below the falls pool has been the best but the activity on some days is very heavy. Often being aboard a jet boat gets anglers to various spots and most often the best spots. One can wait in an area for hours for new fish to swim by if walking the river. If aboard a boat new areas are quicker to get to during the day. We are expecting to great Steelhead fishing in the Stamp through March.