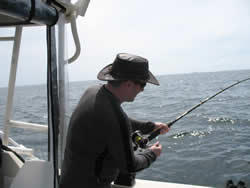 The month of June has already rolled in and one would sometimes think that it was still March in terms of the weather on the west coast but the fishing as predicted has been superb. There is hope, as the weather is forecast to gradually warm up to a more normal pattern over the next week. Fishing for Chinook and halibut on Vancouver Island ‘s west coast has been consistently very good for the last six weeks. The great fishing in local saltwater hotspots is quite evident as everyday there is an increase of vehicles on local roads and highways towing fifteen to thirty foot sport fishing boats. Many of the sport fisher people are traveling by boat to the scenic and pristine waters of Barkley Sound from Port Alberni while others are venturing out to the West Coast to fish Vancouver Islands rugged coastline which is very fishable and safe and also to fish more of the offshore waters.

The 2010 sport fish season in Ucluelet, Barkley Sound, and the Port Alberni Inlet is forecast to be one of the best seasons ever. The early season run of Chinook which are migratory salmon swimming to distant southern watersheds is almost eighty percent complete with the mid summer fish now coming into the mix. Mid summer migratory numbers are forecast to be well over 700,000 Chinook. Coho numbers are also expected to be very high. These salmon should peak sometime in July. The Sockeye sport fishery in the Alberni Inlet should be incredibly good as approximately 700,000 Sockeye are expected to return to the Somass River system.

The Sockeye sport fishery opened on June 1 st in the Port Alberni Inlet. 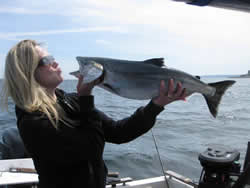 The first few days of the opening have produced very few fish on the troll. There are sockeye in the system but they are not schooling because of cool air temperatures and cool river water. The daily limit is two sockeye per person per day with a two day possession limit of four. It is expected that possession limits with change to four per person per day on July 1 st . Some people are a little concerned about the weather and conditions but one must remember that last year the sport fishery opened on June 15 th and by that time things had warmed up and limits were popular with most boats and crew. The Sockeye are currently swimming the top 20 to 35 feet of water and sense that the Somass River water is cool. Some individual guides and sport fishermen out on the water for these first few days have fished the Nahmint-Franklin area and have still not found any large schools of Sockeye willing to take the lures offered. By mid month things should change. Weather conditions and warmth will be extremely important. Good spots to fish will be Cous Creek, Dunsmuir Point, the China Creek Wall, the slide and narrows and of course the vast area of water around Nahmint and Franklin. Guides and those fishing out of their own sport boat should troll with at least six colorful flashers behind the boat. The most popular lure will be a red or pink (mp 2, 16 or 15-bubblegum color) hootchie. Leader lengths are best at 22 to 27 inches behind a green or red hotspot flasher. Most of the Sockeye in June that are biting will be in the top 40 to 70 feet of water.

Barkley Sound fishing has been very good out on the surf line and one inner area, Pill Point, which has been producing some great fishing opportunities. 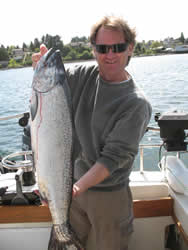 Most of the fish in both areas have been averaging 12 to 15 pounds with some in the mid twenties. Areas such as Cree, Austin Island , Effingham, Kirby and Edward King have produced the largest sized fish. The fish at Pill Point have been hanging in the area for almost two weeks. There are plenty of bait fish from 30 to 100 feet. The salmon that have been hitting are in 90 to 110 feet and seem to like the white AORL12 hootchie, a silver spoon, the 155 needlefish and the green-nickel four inch coyote spoon. Swale Rock has also had some good fishing. On June 4 th guests from Ladysmith were delighted on their limit of Chinook. Two of their six salmon were just over twenty pounds and were both landed on a white hootchie. Surf Line areas have had great fishing in water 60 to 100 feet. Anchovy in a chartreuse Rhys Davis Teaser head with a fairly long leader have been working very well as has the green and blue nickel and the glow army truck hootchie. The fishing in Barkley Sound should be very good in June and July. The migratory flow too southern watersheds are forecast to be very strong. The mid-summer Chinook run migrating to the Columbia River are forecast to be around 700,000 pieces. Barkley Sound waters are very scenic and most of the water is protected on the east and west shorelines.

Ucluelet is often referred to as Vancouver Island ‘s premier salmon and halibut sport fishing destination. Like Barkley Sound the waters inshore and offshore from the Ucluelet Harbor offer some world class fishing. The waters are very rich in bait fish (sardines and needlefish) and the migratory and local

Salmon feed on these throughout the spring and summer months before heading to their spawning grounds. Ucluelet because of its geographical location 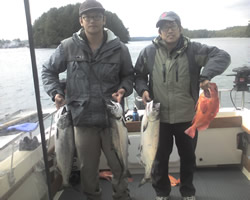 offers salmon fishing twelve months of the year. The summer salmon fishing seems to be changing. August and early September were often considered peak times for Chinook sport fishing. Because of the high numbers of transient Chinook salmon passing along the west coast of Vancouver Island from April to August it seems that the over last few years the peak of the season has been mid-June through July. This is not to say that Chinook sport fishing 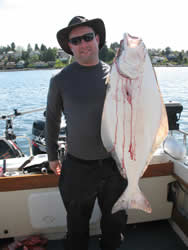 does not continue in August and September. Coho numbers have been quite high for the past three years and have become the highlight in August and September. Coho often from mid-May feed hard and put on a pound per week and by mid-August can weigh from thirteen to twenty pounds in September. The fishing for guides and avid sport anglers has been very good through the spring. The inshore waters within four to five miles of the Ucluelet Harbor have been fantastic with most boats limiting on Chinook and also halibut. Great Bear, Mara Rock, the Alley, and Long Beach have produced some nice Chinook in the high teens and twenties. Guides have been fishing in 70 to 120 feet of water and have done well on the 155 needlefish hootchie, glow army truck hootchie, the green and blue nickel five inch coyote spoon and anchovy in various green teaser head colors. When trolling and using anchovy it seems that a red or green hotspot flasher or an Old Betsy are working the best. The offshore fishing out at South Bank and on the La Perouse Bank has been very good. Sport fishing on the troll has been the fishing method with the most success for salmon and halibut. When fishing in the gully areas trolling deeper and fairly close to the bottom has been most successful. One important thing to remember that during the season the food source sometimes gets bigger and spoon size and even plug size should increase. Of Course the salmon are also often bigger.

The 2010 fishing season in Port Alberni and the West Coast is shaping up just as it has been forecast. People will not be disappointed with their trips this summer. One can expect some highs and lows as the season continues. Their will be more highs this year.