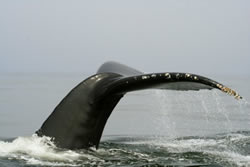 The salmon fishing has been fantastic through the summer of 2011 especially on the west coast inshore and offshore of the Ucluelet Harbor and along the surfline of Barkely Sound. There have been big runs of Chinook which for most of the late spring and summer months have been headed to the big watersheds to the south of Vancouver Island British Columbia . Many of the big runs of Coho have also been migrating to the same area. We are now in mid August the salmon continue to migrate to the south and we are now seeing many Chinook and Coho salmon beginning to return to their natural streams and rivers in many of the local Pacific Rim and Port Alberni Inlet areas. The huge salmon returns have created an unbelievable sport fishing season which have left many guests to this specific area who have fished with a guide or have fished out of their own private boats in complete awe. The Port Alberni Inlet over the past ten days has experienced some very good Chinook fishing with good returns of Somass River Chinook creating some tremendous Chinook fishing in the Inlet from Lone Tree out to the Franklin Wall. We are expectig some fabulous sport salmon fishing through September in the Port Alberni area Barkley Sound and the west coast of Vancouver Island . 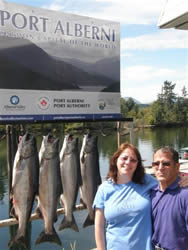 The Port Alberni Inlet has finally had some very good fishing over the last several days. Robertson Creek Hatchery returning salmon making their way to the Somass River have moved into the inlet and the fishing for the sport fishermen has been fantastic. For well over a week guide boats have produced four, five and even six eighteen to twenty-five pound Chinook on average for guests in morning fishing outings. Afternoon and evening fishing trips have also had some very positive results. The salmon have been in fairly shallow water due to the continued cold water coming from the Somass River . The fish seem to be on the move and are hanging around for a small amount of time but seem to be determined to hit the river mouth fairly quick. Some of the best fishing has been from the China Creek Wall down to the Narrows . Many of salmon that have been landed are in twenty-five to forty feet of water with anchovy being one of the best of many possible items to land a Chinook. The clear green and UV green, purple haze, green haze and army truck seem to be the best anchovy teaser heads. In plastic the AORL 12, green spatterback,army truck and the O-15 with 42 inches of leader behind various hot spot flashers have been good for those guides and sport fishermen who do not like to use bait. 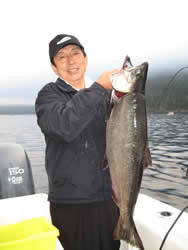 The Chinook should continue coming in as reports of Robertson Creek fish are located in inside and outside waters of Barkley Sound and seem to be in some fairly significant numbers. Coho should come into the mix in the Inlet by the end of August which will develop an even better sport fishery. Limits in the Inlet are two Chinook per person per day with a per person possession limit of four for two days. Coho limits within Inlet waters are four per person per day with a two day possession limit. The Port Alberni Labor Day Salmon Fishing Derby will be held this year for the full Labor Day Weekend. Fishing will begin in the Alberni Inlet waters and also Barkley Sound on Saturday September 3 rd and continues until Monday September 5 th at 3pm. Check locations online for this great event. Great daily prizes can be won.

Barkley Sound is one of the most scenic areas in British Columbia . The area offers excellent fishing and other forms of tourism including whale watching, kayaking, and sightseeing. The fishing on the surfline and inshore areas has been consistent with inshore areas such as Pill Point, Diplock, Poett Nook, Yankee Bay, and Swale Rock have picked up over the last few weeks as the Robertson Creek fish are holding for a day or two in many of these areas before swimming their way up the Alberni Inlet to the Somass River mouth. The Barkley Sound salmon like the many Chinook in the Inlet are predominately four year olds and range in weight from eighteen to twenty-five pounds. The salmon have been in forty to as deep as one hundred feet of water and are hitting bait, spoons and hootchies. The best spoons have been four inch coyotes in green and blue nickel and also green and silver glow and the pearl white. The Rhys Davis Anchovy teaser heads best selections have been peanut butter, army truck and purple haze. The fishing seems to be best around the tide changes. The hour before and after each tide has resulted in some good fishing. Swale and Austin and Cree have had longer fishing opportunities on tide changes with the salmon in tight to the beach or rocks on the flood and on the low tide out in deeper water. If there is bait in selected areas the Coho that are either making their way down the coastline or coming into local streams are feeding frantically and will feed almost the full day which gives to sport angler an opportunity to possible play a salmon any time of the day. The Coho can be found in shallower water and are hitting watermelon four inch coyote spoons and white or green colored hootchies. We are expecting Barkley Sound to have continued great fishing well into September. The continued late summer run of salmon swimming to the south will continue coming into the sound to rest and feed on the masses of rich bait fish and the returning local salmon to various rivers, streams, and creeks will provide for some excellent sport fishing. September is an excellent time to fish for big Coho and Chinook. 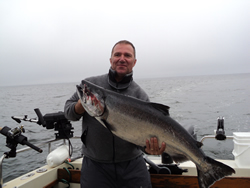 Ucluelet continues to be the premiere spot in British Colubia to sport fish. Masses of Chinook and Coho move down the coastline every spring and summer and the many shallow banks just outside of the Ucluelet Harbor provide some world class salmon fishing. These salmon which begin to arrive in good numbers in May feed and rest in the shallow banks for days and even weeks and come in big schools right into October. The 2011 fishing season has been remarkable for the sport fisher person. Many individuals are on guided trips or in their own sport boat. It has also been a summer with remarkable flat water and perhaps could be said one of those summers with little fog. The salmon have created opportunity at several locations at various times of the year to unfold some great fishing. As of recent the starfish and now The Wreck have had the best fishing. Some Chinook in the thirties and even low forties have been landed at these two locations. Of course as we get closer to September the Chinook and Coho tend to get bigger as they feed vigorously before moving into their spawning grounds. The salmon can also be found at closer locations as the Turtle Head, and the inner and outer South Bank have continued good salmon fishing. Recently it seems that any hootchie, coyote spoon, or Tomic Plug or spoon seem to be working. Bait has also been very good if one wishes to go through the expense of using anchovy or herring. Expect some great fishing to continue and all sport anglers coming to the west coast are reminded of the Ucluelet Ladder Derby with monthly cash pizes for the top three weighed in salmon and the final derby taking place the weekend of September 9 th , 10 th , and 11 th .

Salmon fishing is scheduled to open in the River on August 26 th . Please check regulations before fishing. Of recent the summer Steelhead have already been in good numbers. Guided trips have resulted in some good fishing. We are expecting a banner river fishing season beginning this week right into late October and the first ten or eleven days of October for salmon and fall Steelhead. If you are wanting to plan a trip don’t wait too long as there is not a lot of river trip availability.

The summer salmon fishing season is not over and there are great expectations for some continued great fishing in the area. The summer of 2011 has very much turned out to be what was forecast——TERRIFFIC