September is here, in fact it is mid-September and almost the beginning of fall. This area of British Columbia located on beautiful and scenic Vancouver Island, which includes the Pacific Rim region has provided, since May, very consistent and exciting fishing action for all sport anglers and sport fishing charter guide groups and guests. The Port Alberni area, Barkley Sound and the Pacific Rim region actually provides one of B.C.’s longest fishing seasons where anglers can hit the water almost any time of the year and have opportunity to play and land a salmon. If weather conditions did not hamper fishing opportunities in the late fall and winter months there would probably be an opportunity to land a salmon over twenty pounds during twelve months of the year. In three of our four fishing areas the sport fishing for salmon at this time is still rather spectacular. For some reason the Port Alberni Inlet is one area where the salmon are arriving in huge numbers but most are not interested in biting what sport fishermen are offering. The Somass-Stamp has big schools of Coho moving in everyday. There are Chinook and Summer Steelhead in the mix also. The fishing in the river system is incredible. Some areas of Barkley Sound including the legendary Pill Point area have great fishing at the moment for Coho and some Chinook as does the Bamfield Wall, Kirby, Sanford and Fleming Island. Offshore on the West Coast of Vancouver Island there is still some great halibut and late summer Chinook and Coho fishing. The fishing should continue into October.

The Port Alberni Salmon Festival took place on the Labor Day weekend and has wrapped up with the final count released showing that there were just over 2,000 entrants. The Derby awarded $48,000 in cash and prizes. Local Port Alberni fisherman Cory Jones won $10,000 with the biggest fish of the Derby worth $7,000 and the biggest fish of the day valued at $3,000. This fish like many of the top fish of the Derby was caught in Barkley Sound. Jones’ 43.4 pound Chinook was caught at Nanat Island on bait. Many of the fish that were derby winners of the day were either caught at Pill Point or the Bamfield Wall and areas nearby. On Saturday, the first day of the derby, all three winning fish were caught by Port Alberni resident anglers. Jeremy Kolba picked up a 41.8 pound Chinook at Pill point and Shaun Evans’ 35.5 pound Chinook was landed close to Whittlestone. Bryce Romeril had the 32.7 pound third place winner. Clayton Hawkins, a nineteen year old avid fisherman landed Mondays’ largest fish which came in at 38.1 pounds. Clayton, fished with two school mates Troy Rata and Travis Coghill, picked up the $3,000 winner on the backside of Fleming Island using anchovy in a Rhys Davis army truck teaser head. 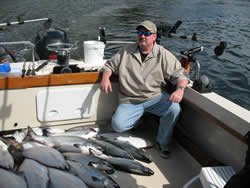 As expected the Port Alberni Inlet is filling with Chinook and Coho but these salmon just do not seem interested in taking bait, hootchies, spoons, or any other type of lure that fisher persons have to offer. During the derby weekend and the last complete week very few fish have been recorded as being landed in the inlet. A couple of fishermen have had fortune to land a fish in the harbor. One angler had a 27 pound Chinook at Lone Tree Point. The angler from Washington State had fished three days and on the third day at 1pm the Chinook hit an anchovy in a glow army truck teaser head. Those having any success have landed fish mostly down at the Narrows, Bells Bay, Mctush, and the Franklin Wall. This is the area where incoming salmon first arrive and the water changes dramatically to fresh water influence. This is also the area of the inside fishing boundary and anglers cannot fish beyond it in order to protect those salmon swimming into the Nahmint Bay and River system. Guide Mel and Doug of Slivers Charters Salmon Sport Fishing have spent an hour or two for a couple of mornings before heading down to fish areas of Barkley Sound. Mel had fortune to land one Chinook and two Coho at Mctush on Saturday morning. The Chinook hit a green and white coyote spoon behind 52 inches of leader and a green-glow hotspot flasher. The two Coho Salmon hit a white and a spatterback hootchie behind 37 inches of leader and a green-glow hotspot flasher. Guide Doug landed three salmon for Bellingham guests in the narrows on a four inch cop car coyote spoon. Chinook and Coho will continue for the next few weeks to flood the inlet before making their way into the Somass River. Fortunes may change for sport fisher persons as the new salmon coming in each day may be more active and willing to strike at the various lures that fishermen offer. (If fishing the upper inlet the O-15 and 0-16 hootchie or the AORL12 hootchie are good bets as are the mp-2 or mp-15 for Chinook. Green hootchies such as the spatterback, T-Rex and the green-ghost are all excellent choices. Use 32 to 36 inches of leader for Coho). 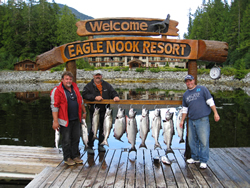 Barkley Sound fishing for the past two weeks has been very good. Last week and this past weekend two individual fishermen were recorded as saying the Bamfield Wall is so good that the fish are jumping into the boat. The Wall especially close to Poett Nook has been good for Chinook and there are plenty of good sized Coho ranging from 12 to 18 pounds. Anchovy in various teaser heads (glow army truck, chartreuse, and clear) are working very well. Pill Point has also been good with most of the salmon found in 25 to 60 feet of water. Various guides including Mel and Doug of Slivers Charters have found that the traditional white and green hootchies are working. The Coho are very active and are of good size, averaging 14 pounds. We are excited about the next two weeks of fishing out in the Sound. There are still plenty of salmon swimming the inside waters of Vancouver Island. Many of these fish will probably come into Barkley sound as they make their way into the streams and creeks located in the area or are coming to the Somass River in Port Alberni.

Fishing out on Vancouver Islands west coast continues to be quite good. The hot spot for guide Al has been the Whales Tail which is located on the 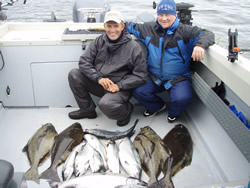 southwest corner of the Big Bank. Al has continued to please guests including the Finnish National Womens Olympic Hockey Team coaches. Coaches Arto and Jurri were guests with Al late last week. Halibut, Coho, and Chinook were all in abundance with each species being limited. The halibut and salmon were all picked up on the troll. Bouncing off the bottom the halibut have been hitting a “Big Turd”. The best two have been the dark brown and the radioactive colors. Most of the halibut are averaging 15 to 25 pounds. The Coho and Chinook have been in water from 90 to 120 feet. The salmon have been hitting green hootchies and spoons. The four and five inch green glow and green-nickel coyote spoons have been the best lures. The Coho are of good size averaging 15 pounds. Remember that only hatchery Coho can be landed. The Chinook in offshore areas such as the Big Bank are predominately feeder springs and average 10 to 12 pounds. This is not to say that there are still not some big Chinook on their migration in September. Guide Mike has been staying rather close to the Ucluelet Harbor and has had some great success at the “Red Can” and at Great Bear. Coho, 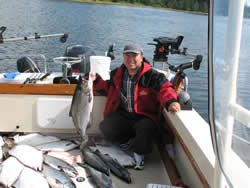 wild and hatchery, are in big numbers and are up to 18 pounds with the biggest taken on Sunday weighing in at 21 pounds. The Coho are hitting various white colored hootchies but seem most interested in a Tiger Prawn hootchie. Mike has found leader lengths to be best at 36 inches. When the sun comes out which it often does in Ucluelet and offshore areas in September a black and white hootchie is working best. Most of the Coho are in 20 to 60 feet of water and unbelievable battlers when hooked. Believe it or not there are a few halibut in the “red can” area. A 120 pound hali was landed on the weekend in the area. Mike is still hooking into a few Robertson Creek Chinook which are swimming the beach. They are hitting anchovy in a chartreuse teaser head. Salmon and halibut fishing should continue to be fairly good into October out of Ucluelet. If visiting the area take one of our many fishing charter opportunities. You will be surprised with all of the activity that takes place on the water during the early fall.

The early fall, river fishing has been incredible. This is the perfect time of year to spend a wonderful day 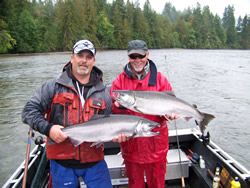 aboard a jet or drift boat and navigate the lower Stamp and fish for bright silver salmon that are moving into the river system and have actually just arrived from the Pacific Ocean. The best fishing is just below “the bucket” and the most abundant salmon are Coho. There are a few Chinook salmon and also some Summer Steelhead in the mix. Fishing has been best in the fast water using a float and weight (traditional fishing) with red, orange, or pink wool. Guides are aboard jet and drift boats with guests. There are also a good number of anglers walking the beach each day. Some anglers have been happy to just fish up at Stamp Falls. Many of these fisher people have not had the success that those in river boats have. We are offering some great fishing-accommodation packages for the fall. You can be either a novice or a seasoned river fisherman. No matter what there are great fishing opportunities on the Stamp River. 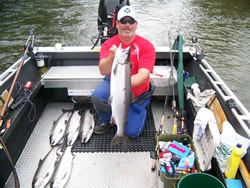 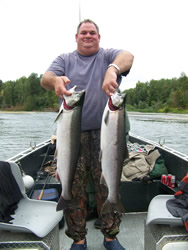