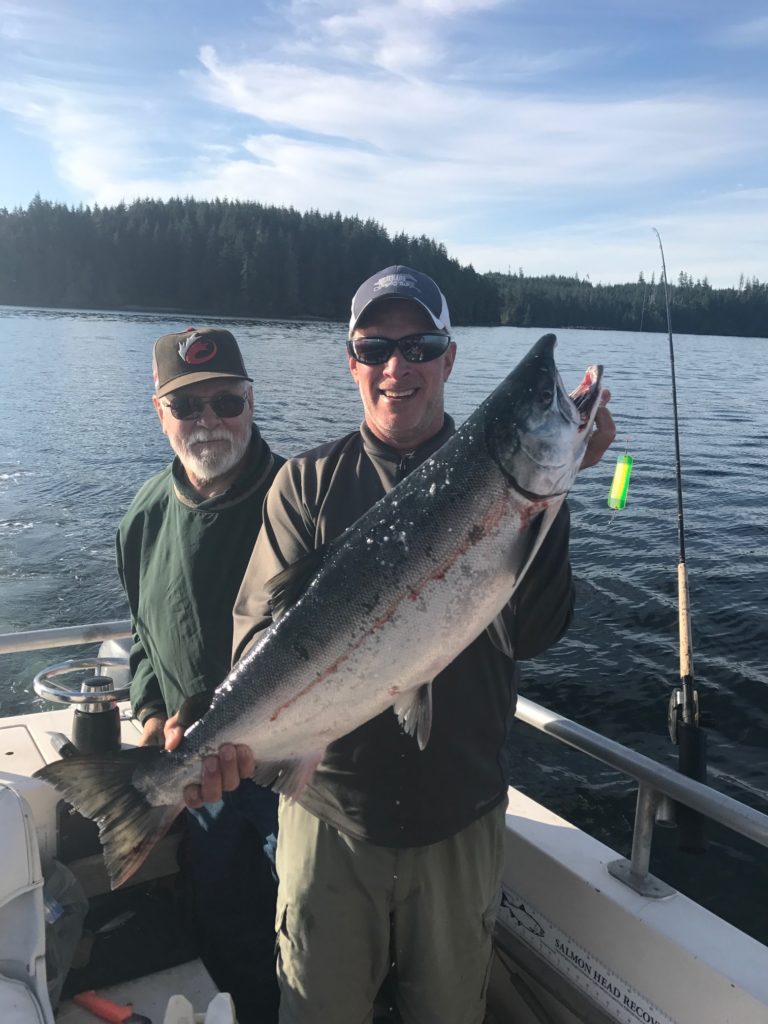 The 2017 summer sport fishing season has pretty well come to an end for most saltwater sport fishing locations around British Columbia. The weather in many of the Pacific Rim areas was unbelievable until the early part of October. Conditions have changed over the last few days and heavy rains have hit coastal British Columbia with severity. Some avid sport fishermen who had not put their boat to sleep for the winter took advantage of the early great fall weather and spent some wonderful sunny days with gorgeous warm afternoons in Barkley Sound up to the October Thanksgiving Weekend in attempt land one or two big Coho that were late returning to their natal streams. Coho beach fishing continues on the East Coast of Vancouver Island. Areas such as Browns Bay, located close to Campbell River and Sarita Bay situated in beautiful Barkley Sound have had some great Chum sport fishing. Chum salmon are a wonderful sport fish and put up a great battle. They are also great on the barbeque. The Browns Bay Chum Run usually peaks just after the middle of October. This year the Brown’s Bay Charity Chum Derby took place on October 14th and 15th with the largest two Chum coming in at over seventeen pounds. This is often one of the last fishing derbies on Vancouver Island each year. Chinook and Coho salmon returning too many of the streams, creeks, and rivers have been very good to date. The return of Somass River Chinook salmon stocks up to the 15th of October are just over twenty-eight thousand. There are over twenty-eight thousand through Stamp Falls. Adult Coho migrating through Stamp falls are at approximately twenty thousand. The Sproat Lake Chinook returns are only at fourteen. The Adult Coho returns to the Sproat are also low and are at about 1,500. The numbers of Chinook and Coho salmon passing through the counters are currently quite high. The peak numbers per day usually occur at this time of year. It is fantastic to see that the Chinook returns are excellent which helps develop a natural spawn in the river system. The drop in the river water temperature and the high discharge of water over the last few days has definitely helped the migration of the salmon to their natural spawning grounds.

The heavy rains in October have put an end to any late Coho salmon fishing on the West Coast of Vancouver Island. The Coho and Chinook have quickly migrated to the many rivers and streams as the various water systems have filled with water. A few areas in Barkley Sound continued to have some mediocre fishing into early October especially along the Bamfield Wall, the backside of Fleming Island, Pill Point and Swale Rock. The offshore fishing continued to be quite good with some great Coho and feeder Chinook fishing out at the Rats Nose and Big Bank. The sport fishing continued to be relatively good to the end of September. Hatchery Coho on the outside waters definitely dominated. 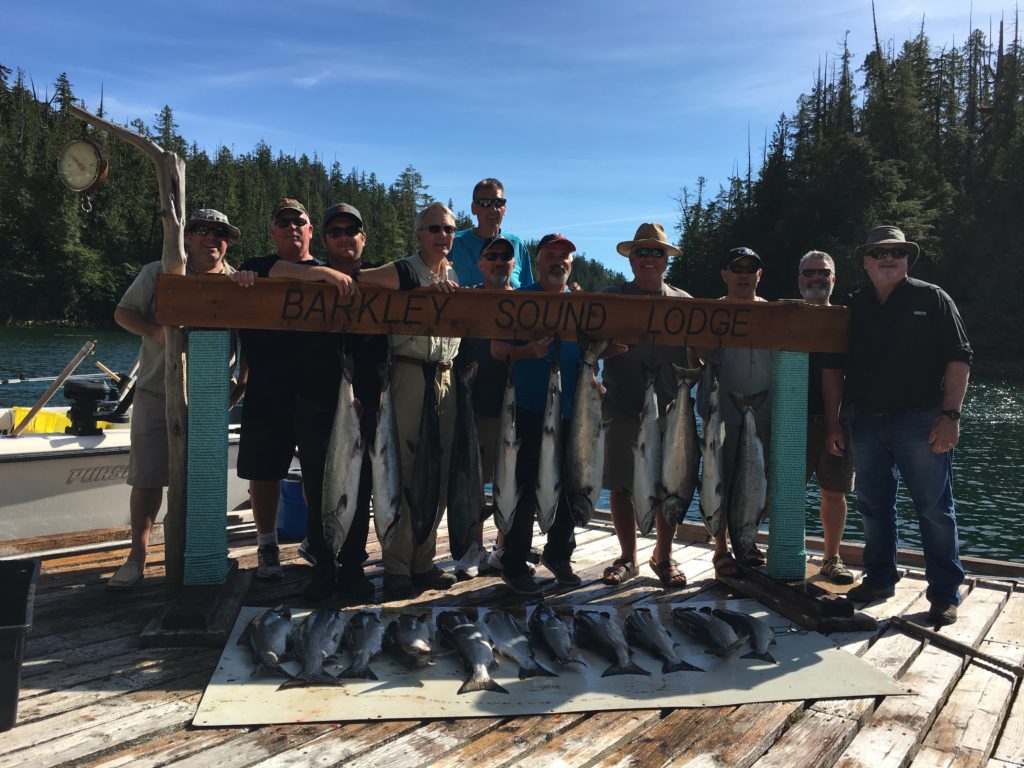 Large group of happy anglers fished with SLIVERS Charters Salmon Sport Fishing in August of 2017 and had a wonderful fishing Experience and landed several salmon.

Now that we are past mid October most sport fisher persons are looking forward to the 2018 sport angling season. Hopefully any early indicators are favorable for next year. In the Port Alberni Inlet for example the returning Jack Sockeye during June and July of 2017 to the Somass system were a little above average. A high return of Jacks often reflects the following years run size. Sockeye returns in 2017 hopefully will be of average or better and create a wonderful sport fishery for the number one commercial Pacific salmon. Ocean conditions have been very favorable for all five salmon species almost for a full year. The mortality rates have been lower. The food sources for the salmon stocks in the North Pacific Ocean have been relatively good. The sport fishing season in 2018 on the British Columbia West Coast should be very exciting with plenty of opportunity for everyone.

For those people that know the Stamp the sport fishing for Coho and Chinook during the fall has been relatively good. Guide anglers have been doing a great job to date for most of their guests. The Stamp was a little tricky to fish until the end of September and even the beginning of October only because the water levels were at record lows making the salmon migration a concern. The heavy October rain over the past few days has dramatically changed this. Many of the guides at some point will continue fishing for salmon but will also begin to fish for Fall Steelhead. This is the time of year that the fly fishing for fall Steelhead is fantastic. The very high water that we are now experiencing can be detrimental to fly fishing and many will fish with conventional gear. The fly fishing most years occurs from the mid of October into the first ten days of November. Guides are hoping to salvage some of that great fly fishing for later in the month. The best fishing for those fisher people in jet boats on guided trips or for those walking has been in the Lower and Upper River. Entering the river at the rifle range is often a good choice for many. Also driving out to Service Road and walking the river too Dolan’s pit is another excellent fishing spot when the Water levels are not high. One needs to find an area where the water is slow. The river has already had close to 22,000 Coho migrate into the system. There should be a continued migration of Coho right into December. The Coho in the lower river have been fresh and still very bright. Most of the Coho landed for guests, who have been averaging limits on a daily basis, are from 8 to 12 pounds. The best method of fishing Coho has been conventional using spinners, blades, and the Gibbs Coho spoon. If and when the levels of the water drop the Steelhead in the system should become very active as they search for loose eggs during the natural spawn. Fly fishermen can of course use flies of their choice but anglers who are wishing to fish conventionally can use gooey bobs, or wool that is white, pink, or orange. When the water does come down other areas to fish are Stamp Falls Park, Eagle Rock, Black Rock, Moneys Pool, and the Slide Pool. The Stamp is a very healthy river system and is fishable 12 months of the year. There is still plenty of time for Coho salmon fishing and also Fall Steelhead. Winter Steelhead fishing begins in December and continues into late April. 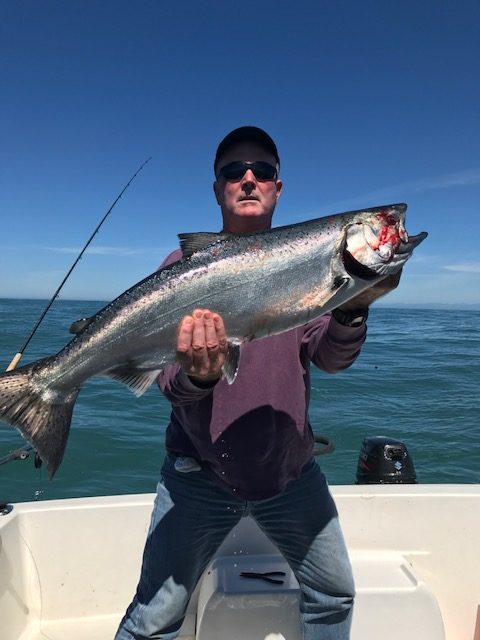 The sport fishing in the Alberni Inlet was relatively good in 2017. Sockeye fishing turned out to be quite good. Originally Sockeye were closed for the year but with good numbers returning in June sport Sockeye fishing opened on July 1st. The Chinook and Coho fishing up to the Labor Day Weekend Derby was quite good. After that time things slowed as the salmon coming into the inlet were interested in hitting the river. The Inlet does have a few lingering Coho and a few Chum salmon in the system but no one is currently targeting them. The 2018 season looks very promising. The indicators for early season projections of Sockeye salmon are good. Sockeye fishing many years last for mid June into the first week of August. It is a wonderful family fishing trip and is a wonderful sport fishery for those from five years of age to ninety-five. The Chinook returns in 2018 could very well be much higher as Chinook Jack returns have been high. Most years the Chinook fishing gets underway by the 15th of August and limits per angler per day is two. We will be looking forward to that sport fishery as well as Coho next August and September. 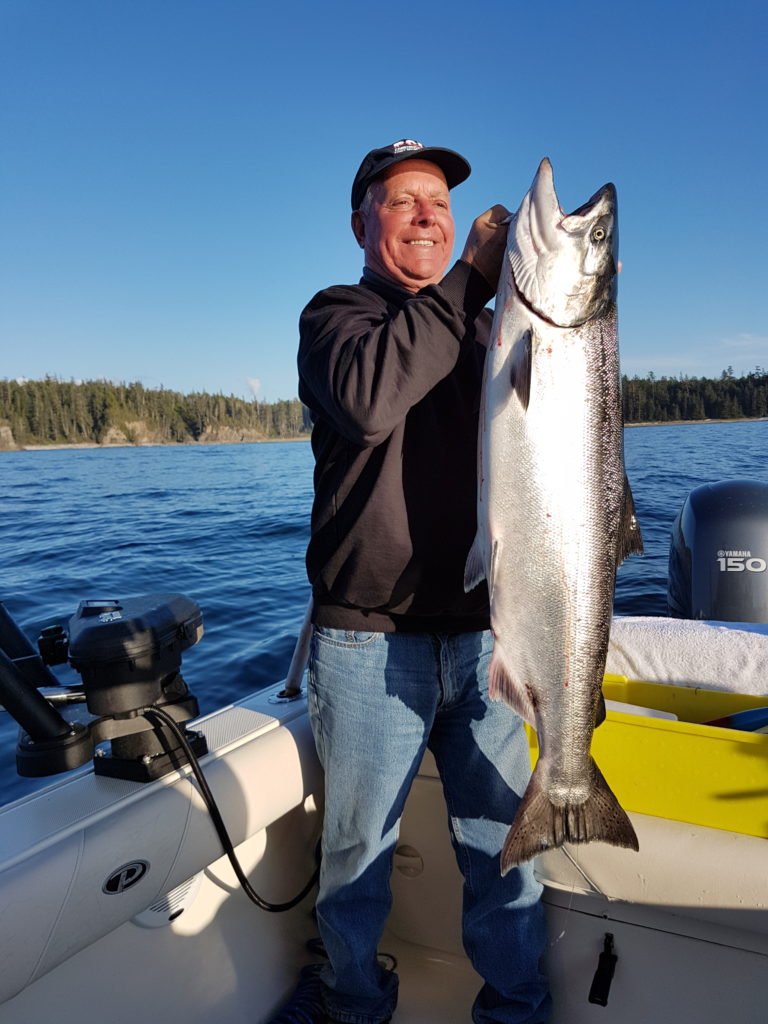 Beautiful 32 pound Chinook landed by Troy of Newfoundland. Troy fished with Slivers Charters with his two sons and nephew and had a wonderful time. This Chinook was landed at Wittlestone. Guide was Wayne

There have been some wonderful fall days on the water in Barkley Sound right through to the Thanksgiving weekend. The afternoons, especially, have been gorgeous with great warmth from the autumn sun and water that was just magically smooth. The sport season has dramatically slowed down but with some perseverance up to just over a week ago a few anglers have had opportunity to land the last stragglers of the incoming or migrating Coho. Two anglers had a great time also in the Sarita Bay area with Chum salmon up to seventeen pounds. The Coho that have been late arriving have been found at Swale Rock, where there continues to be a lot of bait fish, the backside of Fleming Island, and the Bamfield Wall. The Coho have been hitting shorter hootchie lengths from 32 to 38 inches. The best colors have been purple haze, jelly fish, AORL12 and the green spatterback. Bait throughout the 2017 sport fishing season was a very good choice for anglers. The migratory salmon targeted in Barkley Sound in June and July headed to southerly watersheds were average or just below normal for Chinook. West Coast Vancouver Island Chinook and Coho returns were terrific. We offer great lodge accommodation and are looking at extended trips into Barkley Sound for the summer of 2018. Take advantage and organize your fishing trip into Barkley Sound and offshore early for a 2018 sport fishing adventure.

Ucluelet is one of those areas along the British Columbia West Coast that has opportunity every month of the year to get out on the water inshore, or offshore, or into Barkley Sound and fish for salmon and bottom fish. For many months of the spring summer and early fall there are huge numbers of migratory salmon swimming their way to natal streams, creeks and rivers to the south. These salmon are right outside Ucluelet’s backdoor and they stop on the various banks to rest and feast on herring and sardines. The salmon are usually in relatively big numbers and create a great sport fishing opportunity throughout the years more favorable months for anglers. There is also a good number of local salmon that feed close to the beach on the rich resources of bait fish. Each and every year there is a return of different salmon species to local streams and rivers that extends from mid August until early November. The fishing out of Ucluelet this year did not disappoint. The best fishing was out at the Rats Nose and the egg. The salmon fishing out in these locations was very good. We are expecting the summer of 2018 to once again be very good out on the various banks and also inshore outside of the Ucluelet Harbor mouth. 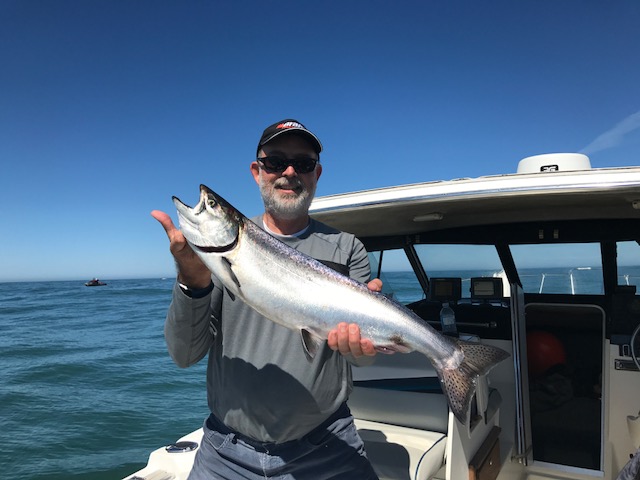 WE have been organizing our three and four day and night lodging for 2018. Join us in a comfortable and fun environment next summer from early June through early September.