It is already mid September and fantastic Salmon Sport Fishing continues especially in Barkley Sound along the Bamfield Wall and outside the Ucluelet Harbor close to the beach in Florencia Bay and Wya Point.   The Somass-Stamp River system has also picked up dramatically with plenty of Coho and Chinook salmon in the river system as the fish are migrating to their spawning grounds.  The Alberni Inlet sport fishing has been slower as the salmon are not holding and making their way to the mouth of the Somass River.  Some sport fisher persons are spending time close to the Franklin Wall and have had a little success landing a few good sized Coho.

The forty-forth annual Port Alberni Salmon Fest Derby was a huge success over the three day Labor Day Weekend.  People worldwide enjoyed themselves either fishing in the derby or just spending time on the grounds at Clutesi Haven Marina.  The winning fish was landed by Langley B.C. resident Bob Moulton.  His fish was landed on Sunday morning September 6th just outside the Bamfield Harbor using a pink fluorescent hootchie.  The fish won Moulton $5,000 for the biggest salmon of the day and another $10,000 for landing the largest fish of the derby.  Local Port Alberni sport fisher persons winning daily prizes were Trevor Cootes, Joe VeenKamp, and Brad Jasken. 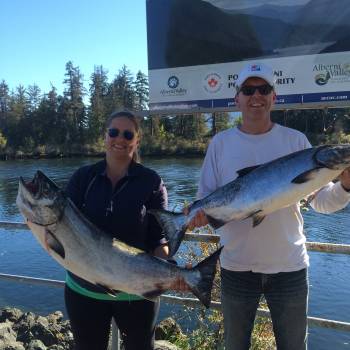 Jessica and Raymond from Victoria B.C. show off 32 and 25 pound Chinook they landed at the Bamfield Wall on September 12th 2015.  These fish hit Anchovy. Guide was Doug Lindores of Slivers Charters Salmon Sport Fishing.

The Alberni Valley did experience some ample rainfall early in the month which provided enough water for Sockeye Salmon to migrate into Sproat and Great Central Lakes.  The Return of Sockeye Salmon to the Somass River system in 2015 was the largest return “ever” recorded.  Final number in the DFO forecast is just over Two Million.  Over five Hundred Thousand have escaped into one of the two lakes mentioned.  Sockeye are still in good numbers in the system as they continue their migration.  Fresh Chinook and Coho are moving into the Somass system.   The salmon in Barkley Sound that are creating a very good sport fishery are headed towards the Somass, the Sarita River, Nitnat, and also to larger watersheds to the south.   Rain is in the forecast for the end of this week which means fish will move to their natal creeks, streams and rivers.  The salmon that are still offshore will make their way into the system as they continue their long journey.

The Department of Fisheries and Oceans has announced that there is a dramatic increase in the Chinook run size returning to the Somass.  The original forecast of only twenty-five thousand Chinook returning to the Somass River System has been increased to Sixty Thousand Chinook.   In early September the rule of retaining salmon under 77 cm was changed.  Sport Fisher persons fishing the Alberni Inlet and Barkley Sound can now land one salmon over 77 cm per day and have in possession two Chinook salmon with one over 77 cm and one under 77cm each day.  A two day possession level of two and two (two under and two over) is now in effect.  This was great news for those many individuals fishing in the Port Alberni Salmon Festival Derby and those many sport fishermen taking advantage of fishing during the month of September. 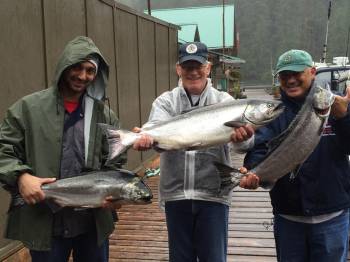 Larry, Paul, and Patrick show some of the salmon they landed fishing in Barkley Sound.  The group is from Houston, San Francisco, and Albequerque U.S.A.

The best salmon fishing currently is in Barkley Sound.   The many salmon that are migrating into the Alberni Inlet are rapidly swimming into the River system.   The Inlet is filling daily with fresh Chinook and Coho.  This is also very true in Barkley Sound as Coho and Chinook salmon are still feeding heavily but are getting close to their spawning grounds.  The salmon generally end their feeding cycle when they enter fresh water systems or get close to fresh water influences.  The Bamfield Wall has been absolutely on “FIRE” since the last week of August.  Pill Point and Assets have both been very consistent but have not experienced the same “SPORT Fishing” that “THE WALL” has experienced.  The salmon in the sound have been feeding very hard around tide changes but have also been very active between tides. The salmon are in fairly shallow water in Barkley Sound and also the Alberni Inlet.  Fishing between thirty and fifty feet has not been uncommon in Barkley Sound.  The best fishing has been just outside The  Bamfield Harbor mouth down to Kelp Bay.  Yankee Bay and Wittlestone have also had excellent sport fishing.   There is a huge amount of bait fish in the area that has brought in local and transient salmon.  The best lures depending on where one fishes are the 0-15, 0-16 (Alberni Inlet), spatterback and AORL 12 hootchies.   Using anchovy in both the Inlet and the Sound seems ideal and for many is working the best.  Leader lengths from five and a half to six feet behind green, red, or burgundy flashers with a gold face are working very well.  The glow army truck, purple haze, and green haze Rhys Davis Teaser Heads are working by far the best.  The AORL 12, purple haze and spatter back hootchie with 38 to 42 inches of leader behind a green, red, and purple gold flasher are also ideal for Chinook and Coho in Barkley Sound and the Alberni Inlet. 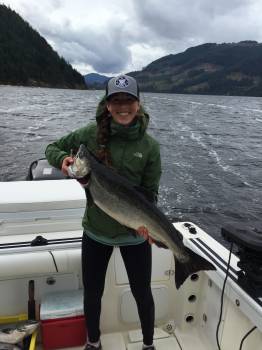 Salmon fishing for Coho and Chinook are now under way in the Somass-Stamp River system.  There will also be some fantastic Fall Steelhead fishing as we get into October.