We are closing in on mid-April and the 2011 saltwater fishing season is here. With weather patterns now becoming more predictable anglers can get out on the water with a little more ease in those many areas that are not located in “protected” waters. 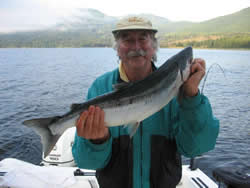 The migraory flow of the early Chinook salmon headed down the coastline to natal streams to the south has just started. With feeder or winter Chinook salmon also still in the system April and early May can have some very good fishing days. Not only is the ocean fishing good but the Stamp River is often very good with large numbers of wild and hatchery Steelhead in the Lower and Upper River. Many say that April can often be the best month of the year to fish winter Steelhead. This is also a month with very little fishing pressure making it a time where keen river anglers can fish the Stamp in solitude.

The 2011 fishing season is shaping up to be as good or if not better than 2010. There are many indicators that show the season should be very good for Chinook and Sockeye salmon. Coho salmon indicators look good also and with it being an odd year pink salmon will be an added bonus with close to twenty million pinks swimming down the west coast to the Fraser River .

Prawn fishing in the Alberni Inlet again opens in April. The China Creek, narrows, and Mctush areas are very popular for sporties. Much of Barkley Sound has been open all winter where the prawn fishing has been very good. Traps are usually set in 175 to 230 feet of water. Often in April and early May the Alberni Inlet is covered with red buoys. Make sure if putting out traps that lots of weight is used to keep your traps down. The best bait for prawning is Carlyle Just Tuna Cat food and Ace of Baits prawn pellets.

We expect that the Sockeye sport season will get underway by June 15 th and that limits in the first part of the season will be four per person and a two day possesion limit of eight. Last year over one million Somass Sockeye Salmon returned to the Alberni Inlet. Pre season forecasts are indicating that this number could be higher for the 2011 season.

The Sproat Lake Derby which occurred in early March had a twenty-four pound salmon take top spot. Fishing early in the year was quite good but has been spotty since. With herring coming to the beach and with the start of the early summer run of Chinook headed to southern watersheds we are expecting some good fishing out in surfline locations. Areas like Kirby Point, Cree, Effingham, and Edward King have recently had a few good reports of hatchery Chinook being landed and as time moves forward into late April and early May the fishing should really improve. Look out for some great fishing during the summer months. Forecasts are showing that the mid summer Chinook migratory flow to the Willamette and Columbia River will be very strong with most of the Chinook predominately being four and five year olds. With the weather patterns becoming more reliable those getting out to Barkley Sound should plan on fishing on the troll using either hootchies, coyote spoons, or anchovy. One guide boat recently did well at Effingham and Kirby landing over a two day period eight Chinook in the ten to seventeen pound category. The Chinook were hitting four inch cop car and the green-nickel and blue-nickel coyote spoon. Army Truck needlefish hootchie was also a great choice behind a green glow hot spot flasher. If you get close to the bottom from Swale rock out the Meares don’t be surprised if a halibut hits your bait or lure.

This is the time of year that we can often fish for a variety of wonderful tasting seafood delights. Often we can fish for what is termed a “seafood safari” 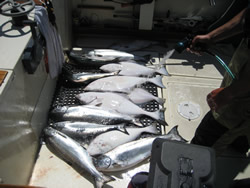 and individuals can enjoy a day of crabbing, prawning, and rock and lingcod fishing (opened April 1 st ) and of course salmon. The salmon fishing close to the Ucluelet Harbor has definitely picked up over the last ten days. Beg Island , Great Bear, Forbes, Sail Rock, and an Area termed The Alley has been producing some nice salmon into the high teens. The herring have been moving in and there is also plenty of needlefish and pilchards in the area which brings the salmon in close to the beach during tides to feed. Trolling has been the best method and it is important to watch the sounder and stay within about thirty feet of the bottom. Usual fishing depths for the areas mentioned are 90 to 120 feet. Coyote spoons have been working. The three and a half and four inch army truck and glow green have been the best. Anchovy in a Rhys Davis teaser head in glow green, chartreuse, or army truck behind purple, red or green glow flashers have been used with success by a few guides although spoons seem to be the best choice at the current time.

Summer fishing out of Ucluelet looks very good. The mid summer run of migratory Chinook salmon and also Coho are forecast to be quite strong. The Chinook are predicted to be predominately four and five year olds which suggests some bigger salmon in the thirty and maybe even forty pound range. The Ucluelet ladder derby gets started on May 1 st and continues through Labor Day Weekend. The final Derby is the weekend following. Cost is $50 for the full year. There are great money prizes monthly for the top fish.

One of the biggest kept secrets is the great fishing that occurs in the Stamp for Winter Steelhead in April. Very few people are on the river and there are plenty of fish. In fact there are some fresh steelhead still coming into the Lower. Guides generally have their clients in the Upper River aboard drift boats and those that are bank fishermen are mostly fishing in the Upper river also. The bait ban is still in effect. Those looking for fresh new fish in the Lower River below “the bucket” can still use roe and roebags. The Upper River bank or shore walkers have had some great success using one eighth and quarter ounce jigs in pink or purple or both of these predominant colors with some white mixed in. The guides in the jet boats have been using four inch pink worms, goey bobs and spin n glow. Spoons are now beginning to work fairly well. With the fishing pressure ridiculously low and the river water warming the Steelhead have become more active. The mix of wild and hatchery fish is almonst 50-50 and some of the fish that have been landed over the last few days have excellent color. In fact some of the fish have been chromers. The size of most of the fish have been averaging eight to twelve pounds. There still are a few in the mid teens. Late September through mid November is a very popular time to fish the Stamp. It is the time of year when not only Chinook and Coho have come in for their natural spawn if they do not go to the hatchery but also a time when there are plenty of feeding summer Steelhead. It is also the ideal time for fly fishermen to take advantage of the opportunity to witness some of the best fly fishing one can find. 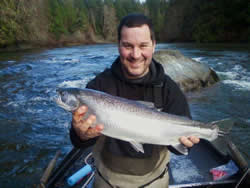 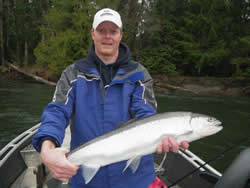 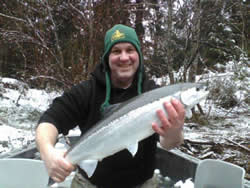