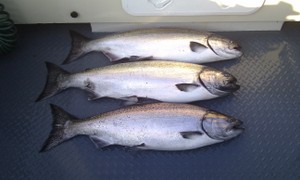 The West Coast of Vancouver Island is a wonderful area to visit and spend on vacation. Vancouver Island is located only a very short plane or ferry-ride west of Canada’s largest Western City “Vancouver”. Vancouver Island, British Columbia has several unique settings and rugged coastlines. British Columbian’s are fortunate to have such a diverse selection of terrain. The Island’s west coast not only offers world class salmon fishing but also offers other adventures and unique cultural activities. Those visiting Vancouver Island during the late spring and summer months must take in not only a sport salmon fishing adventure but also explore the great rainforests, beaches and lakes. When fishing out in scenic Barkley Sound or offshore from Ucluelet and Tofino one can view wildlife and also whale watch. When on Vancouver Island and visiting local community’s visitors can seek out west coast culture, spa retreats, and of course take in some great west coast cuisine.

Vancouver Islands West Coast has witnessed superb sport salmon fishing for several years. The 2014 season is expected to be no different. In fact the 2014 sport salmon fishing predictions or forecasts are one of the best in decades. The expectation of high numbers of migratory salmon headed to distant southerly watersheds is already looking fantastic. The Columbia River system is expecting well over 1.6 million Chinook and ONE Million Coho to return. The return to the Columbia River is the largest on record. Records have been kept since 1938 at the Bonneville Dam. Salmon fishing around Ucluelet and the protected waters of scenic Barkley Sound has already been good with many clipped salmon in the high teens and low twenty pound range being landed by guides and their guests and also by sport anglers fishing in their private boats. We are expecting the Port Alberni Inlet to have another remarkable Sockeye season with forecast return numbers at a record 1.6 million. The Sockeye season usually begins in mid June and continues into the first week of August. Salmon fishing in Barkley Sound along the surf line and offshore waters will continue from now through mid September or longer. Be prepared for what is being considered a banner and remarkable sport salmon fishing year on British Columbia’s west coast and Pacific Rim area—Vancouver Island. 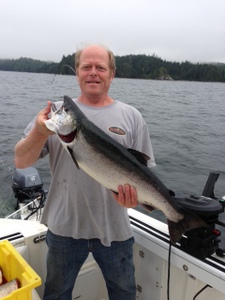 The month of April and May is often quiet in the Alberni Inlet except for the many prawners who are out on the water. Prawn season openings are monitored by DFO in the Inlet and one must watch the various openings and closures. The sport prawning in Barkley Sound has been very good. Guide boats in the early spring include in their salmon fishing trips, prawn fishing. Usually the prawn traps are dropped before fishing and then after fishing the traps are picked up to find the great prize coming up from the ocean floor. Barkley Sound fishing has dramatically picked up over the last couple of weeks. Swale Rock, Vernon Bay, Meares Bluff, Austin Island and Alan Point have all been producing some nice salmon in the eleven to fifteen pound range. The Swale Rock area has had some nice sized spawners headed to the Southerly watersheds that have weighed up to twenty-five pounds. Many of the Chinook have been clipped and are the early run of salmon migrating to rivers to the south. The salmon have been relatively deep from 100 to 160 feet. A variety of coyote spoons have been working. Green glow has been a favorite in the four inch size as has the green nickel and silver glow. Some guides and sport fishermen have been just using silver spoons while others are doing well using a variety of hootchies. The fish lately have been feeding heavily on Pacific Sand Lance and other bait fish. Needle fish hootchies and also the glow army truck octpus and needle fish behind green and green glow hotspot flashers have been working very well. There have also been a few favorable reports in Samatao Bay, Pill Point and Diplock and Sarita Bay where a few nice sized Chinook have been landed. One angler reported playing four nice salmon in Samatao in fifty feet of water. A green glow four inch coyote spoon was working well behind a green glow hotspot flasher. Fishermen trolling with anchovy have had their best success using a chartreuse or green Rhys Davis teaser head with a six foot tail. We are expecting the fishing to be very good through the spring and summer months. The mid-summer run of Chinook and Coho which begins in late June and run into early August is expected to be the heaviest congestion of the migrating salmon run swimming to the Columbia and Willamette systems to the south. Many of the salmon will be four and five year olds which often means some good sized Chinook over thirty pounds. The surf line areas of the Sound as well as areas like Kirby Point, Gilbraltor, and the back end of Fleming Island should have some great fishing as the rich resources of bait fish come into those areas which bring in the big Tyee. 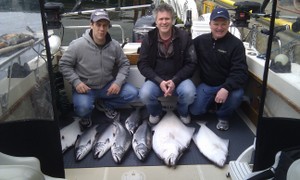 Ucluelet is one of those spots where it is possible to land a twenty pound salmon every month of the year. Of course weather plays an important role in terms of getting out onto the water. During the winter months there are breaks in the weather patterns which makes it possible for keen anglers to get out on the water. During the month of April the fishing close to the Ucluelet Harbor had been quite consistent. The Alley, Great Bear, Forbes, Sail Rock and Beg Island were all producing some nice feeder Chinook. Most of these salmon have been averaging ten to twelve pounds. With the weather changing the last few weeks guided trips and sports anglers have been able to get further offshore. The Inner South Bank has been picking up, especially over this past weekend. The guided trips have had some great fishing with limits on Chinook weighing up to seventeen and eighteen pounds. The Inner South Bank has been most favorable for those fishing close to the bottom at 135 feet. Some have had success using purple haze and army truck glow hootchies. The white Turd and the T-Rex hootchie have been very good for some guides and sport fishermen with both hootchies producing the best catches for a couple of our Ucluelet guides. The past weekend also saw some of the first halibut of the season. The Halis have been migrating back to the deep and usually by the third week of May have migrated back to the shallows. The white Turd for one guide was good for two fifteen pound halibut fishing the Inner South. Long Beach with weather permitting is also a great spot at this time of year for halibut as is the three mile off of Cape Beale. Of course with the weather patterns just in the midst of changing fishing the banks is always under the scrutinized “Weather Permitting” eye. This year halibut in terms of Maximum length is 133 cm. The possession limit is two with only one larger than 90 cm. Six Halibut are allowed per license holder and must be recorded on ones saltwater license.

May and June should prove to be two very good fishing months with some nice Coho coming into the mix in late June when the big migratory flow of the mid-summer run begins. Look for some great Chinook salmon in the high thirties and low forties this summer. The Ucluelet ladder derby began on May 1st and will continue until the Labor Day Weekend with the final derby the second weekend of September. The cost of the Ucluelet ladder derby is $50 for the year or for each trip out on a guided trip the cost is $10. There are great monthly prizes for the top fish. Last year there were some excellent money wins per month by a variety of very happy sport fishermen. 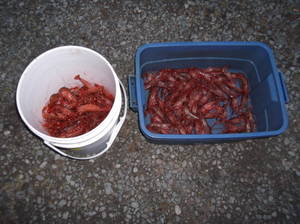 The winter Steelhead season is all but over. Many of the spawned out fish are heading back down the river and out to the waters of the vast Pacific. The Fall of 2014 is expected to be very good with plenty of early chinook and coho and summer Steelhead in the mix. Those keen on fly fishing should look at booking trips from the 10th of October into the first ten days of November.