The time is quickly passing and we are already into mid-June. The fishing to date has been absolutely terrific. Ucluelet and Barkley Sound have had some extremely excellent days. The best fishing in Barkley Sound has been along the surf line. The Chinook are getting bigger as are the Coho. The biggest Chinook to date is 35 pounds picked up by guests with Ucluelet guide Mike close to the Ucluelet Harbor at Great Bear. Guide John picked up his biggest fish of the young season last week at Kirby Point in Barkley sound at 23 pounds. Sockeye fishing in the Inlet opened on Monday June 15 th . The season opening will permit the sport fisherman to obtain a limit of 2 salmon per day with four in possession after 2 days of fishing. To date the Sockeye fishing for the sport angler has been absolutely amazing. Guides have been limiting for guests each day.

Indicators are showing that Sockeye numbers may very well be higher than what was originally forecast. The counters are now in place and the June 17 th reading showed that approximately 10,000 sockeye have made their way into Sproat Lake and 14,000 Sockeye have gone through the counters into Great Central Lake. The Sockeye season for sport fishermen should really shape up well.

The 2009 season predictions seem to be very accurate for Chinook and Coho. Migratory flows to the south are 1.6 million Coho and approximately 750,000 Chinook. Pink salmon returns are estimated to be between 14 and 17 million. Sockeye returns to the Fraser are between 12 and 13 million. Barkley Sound and Inlet fishing and of course all fishing offshore should be unbelievable.

We offer some very attractive fishing-accommodation packages for those travelling to the area to salmon fish. Any guest or visitor to Vancouver Island wishing to salmon fish should organize very quickly as dates are quickly filling.

Sockeye fishing in the Port Alberni Inlet opened on Monday June 15 th . As described by guide Mel the fishing was absolutely fantastic on the first day of fishing. Mel with two guests from Ontario picked up their limit by 8am. The fishing has been very good around Lone Tree Point and Cous Creek. The China Creek area around Underwood and Dunsmuir Point has been good. The best fishing for the first week however has been the Nahmint area. There seems to be a very large number of schools in the whole area. Guides Doug, Mel and John have limited for guests from areas around the world the last three mornings. The sockeye are taking all of the regular gear. The mp 15 and mp 2 hootchies as well as the 183 hootchie which has a glow green head are working well. Mel has also had hits on black bare hooks. The best fishing has been in depths of 50 to 60 feet. Green and red hotspot flashers were working with the mp hootchies. We are expecting if forecast numbers go up, per day limits could be raised to four salmon. Sockeye fishing often continues into the beginning of August. The water temperature of the Somass River has reached almost 18 degrees Celsius. This has slowed the Sockeye down and they are obviously beginning to school in the inlet. 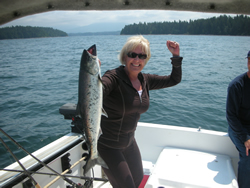 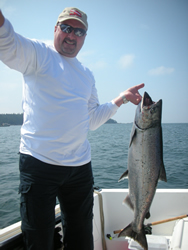 Guide John of Slivers Charters Salmon Sport Fishing had a husband-wife team last week and had some of the years or even past two years best fishing days. The group mainly fished around Kirby Point and Edward King Island. The biggest fish of the two days was 23 pounds and the Calgary couple took home limits of Chinook and Coho. The Cop Car Coyote spoon and the four inch watermelon coyote spoon were working very well. The salmon were not interested in bait.

This past Saturday and Sunday and also Thursday was completely different with many salmon in the 6 to 13 pound range. The number of Coho from 5 to 7 pounds has been unbelievable to say the least. Guide Doug on Saturday morning June 13 th had guests from Edmonton play 30 or more Coho. On Thursday the 18 th of June guests from Spokane Washington played well over 40 Coho. Being selective the group landed 6 Coho around 7 pounds and 3 Chinook weighing 12 pounds each. The Coho were in the top 30 feet of water and the Chinook in about 80 feet of water. The Coho were very interested in hitting a purple haze hootchie on a purple haze flasher. The place to fish in Barkley Sound over the past weekend of was Cree and Austin Island. Guide Wayne had two very good days landing some nice Chinook up to 27 pounds. The Chinook were taking anchovy in an army truck Rhys Davis Teaser Head. The UV green teaser head behind a green hotspot flasher was also working well. As we get into later June and early Julythe Coho will get bigger as they vigorously feed on the rich sources of bait fish. Coho can often put on a pound per week.

We are expecting the June and July fishing to really improve with even better fishing opportunities in August. The migratory flow will continue in big number through the summer and in August and September the Barkley Sound and Robertson Creek Hatchery returning fish will show up. This will create some unreal fishing days.

Ucluelet fishing offshore and inshore has been very good for well over a month. Guide David has been fishing the big Bank most days. David often fishes halibut and salmon on the troll. The success rate has been very good as guests have been picking up limits in both Chinook and Halibut. The Salmon on the Big Bank have been hitting the purple haze hootchie and white hootchies. The Halibut have been hitting an army truck glow hootchie. The Chinook on the big Bank have been averaging up to 17 pounds. Many of the Coho have been 8 pounds. Other guides who have not been doing the combo trips have stayed close to Great Bear and the Lighthouse Bank and have had tremendous success with guests. Guides Shawn and Al have been hitting fish up to 30 pounds. The last three days have been phenomenal. Many guides and sport fishermen have been limiting in salmon by 9 am each morning. Bait in a clear and purple haze Rhys Davis Teaser Head, nasty boy coyote spoon, and army truck spoon and blue colored hootchies have all been working very well. 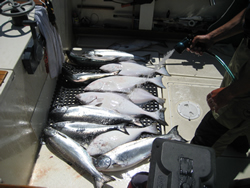 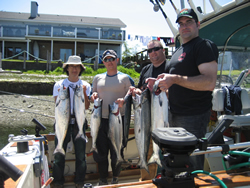 The days have been relatively clear in terms of weather on the coast. July and August can often bring fog. When fishing on your own sprot fishermen should be equipped with a good GPS, radar reflector if no radar and a good VHF radio. Safety is of outmost concern especially when others can be at risk if in your boat.

Barkley Sound and Ucluelet fishing will be the ultimate of fishing right through September. Call Doug at 1 877 314 6800 for more information.

Somass-Stamp River
The Somass River will have a Sport Sockeye fishery. Opening day was June 15th.

For those that cannot get out onto the inlet in a boat this is a great fishery. People often get on the banks of the Somass River by 4 am. We also provide jet boat fishing for Sockeye on the Somass. The fall fishing in the river will be extremely good for Chinook, Coho and summer steelhead.