Area Report and Seasonal Outlook for 2017 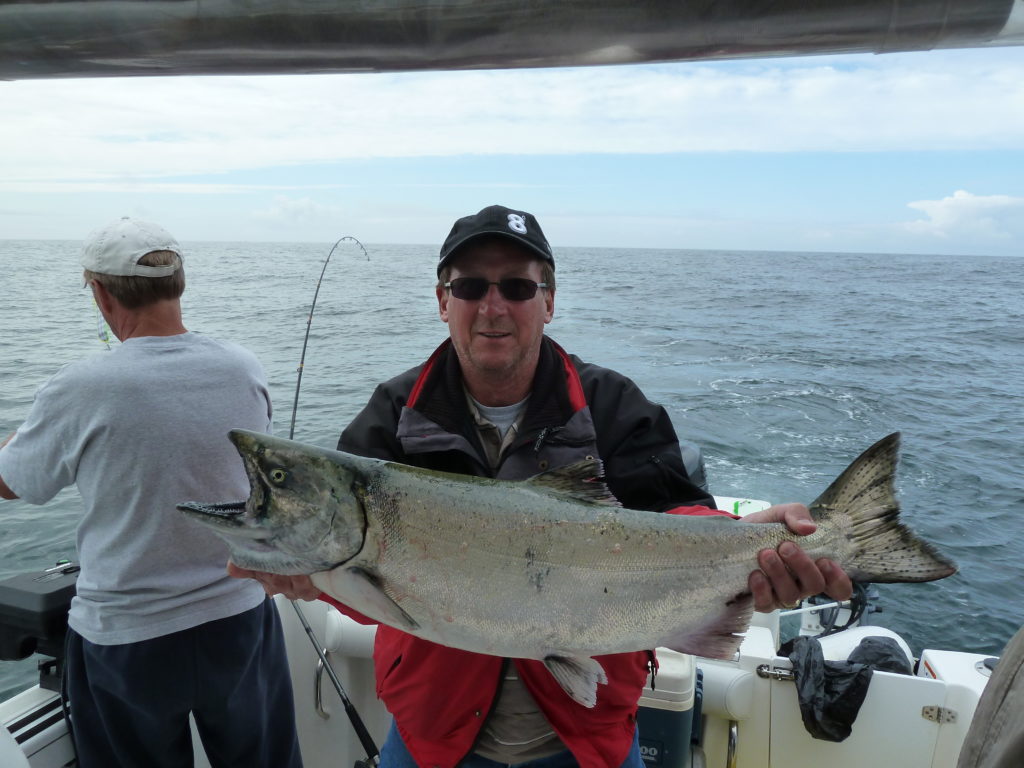 Harry of Langley British Columbia shows his Chinook Salmon landed in Barkley Sound Vancouver Island. This fish was landed in June. June I often a favorable month in Barkley Sound and offshore. Big schools of Chinook are headed towards the big watersheds to the south. They stop to feed on the rich sources of bait fish along the coast line of West Coast Vancouver Island
This salmon hit a green nickel coyote spoon in 90 feet of water

It has been a relatively long and colder than average winter in all areas located in Central and West Coast Vancouver Island. Spring and summer are coming and when finally arriving we can expect the weather conditions to improve and allow for some productive days out on the water. Winter Chinook fishing in Barkley Sound and close to the Bamfield Harbor has been slow but should improve if the herring spawn is anywhere like 2016. Over the past six weeks there has been some opportunity for a few avid anglers to get out salmon fishing in the afternoons when there has been some warmth from the sun. There have been reports of a few feeders being landed around Kirby Point and all the way up to Edward King Island. There have also been a few feeders landed around Scotch Bay and up at the whistle buoy. Those few anglers on the water have been fishing depths from sixty to one hundred and fifty feet. Anchovy and herring on the troll in various glow teaser heads with a six foot leader have been working. Three and a half inch spoons in Irish Cream, Cookies and Cream, cop car, and a four inch Gibbs green glow are great choices. Hootchies in purple haze, green spatter back and glow whites should also be excellent choice of lures. The key regarding Winter Chinook fishing is finding the bait. When one finds bait there should be some success. There are herring balls close to Bamfield and many areas of Barkley Sound. The Herring spawn normally occurs in March which should provide for some greater improvement in the Winter Chinook fishing. 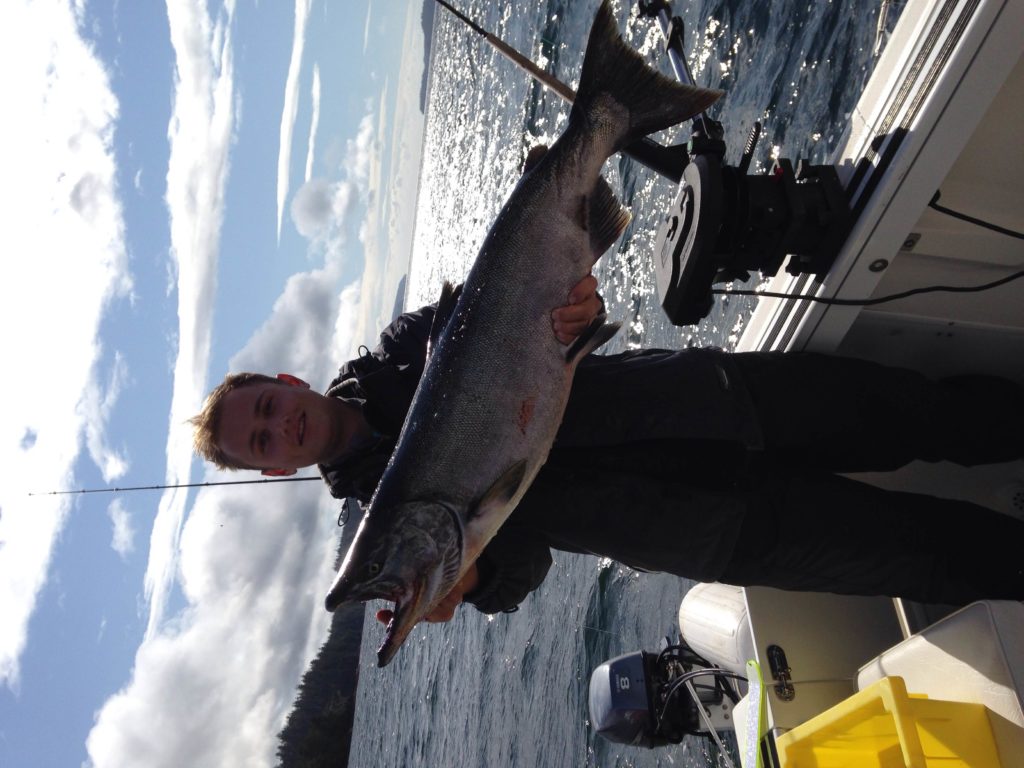 The first weekend of March will see the areas first salmon fishing derby. The annual Sproat Loggers Derby will be hosted out of Poett Nook (also derby headquarters) which is located at the far end of the Bamfield Wall and in Sarita Bay. The last few years have seen over 400 entrants and there have been fish historically weighed in over twenty pounds. The derby is usually marked as the beginning of the saltwater season in Barkley Sound and has some wonderful prizes. Information can often be found online and derby entries can be obtained at Gone Fishing Stores.

At the time of this writing we are still waiting for an update on projections for Sockeye returns to the Somass River. The various indicators and early pre season reports are not looking favorable for a good return. The last two years have been from 1.2 to over 2.3 million pieces returning to the Somass River system. On the other hand West Coast Vancouver Island Chinook returns where stocks have been enhanced have a fairly good outlook status for 2017. The 2012 and 2013 salmon stock that went to sea have done very well in terms of survival and the return of a good number of four year olds and some five year olds to the West Coast should provide for some relatively big fish in what is termed “TYEE” size.

The 2017 Chinook returns to the big watersheds to the south were released in December 2016. The returns of what might be termed “early summer and mid-summer” are not bad and are on par with the TEN year average. The big watersheds are the Columbia, Kalama, Cowlitz, Sacramento, and Willamette. The Chinook travel as if on a highway along the coast of West Vancouver Island and sit out on the many sandy banks and feed on vast amounts of bait fish. These salmon also migrate into Barkley Sound and rest and feed on the rich resources of bait in many of the favorable Barkley Sound salmon fishing areas. With this in mind the salmon fishing for Chinook in late May, June and July should be relatively good for all anglers fishing the sound and offshore. 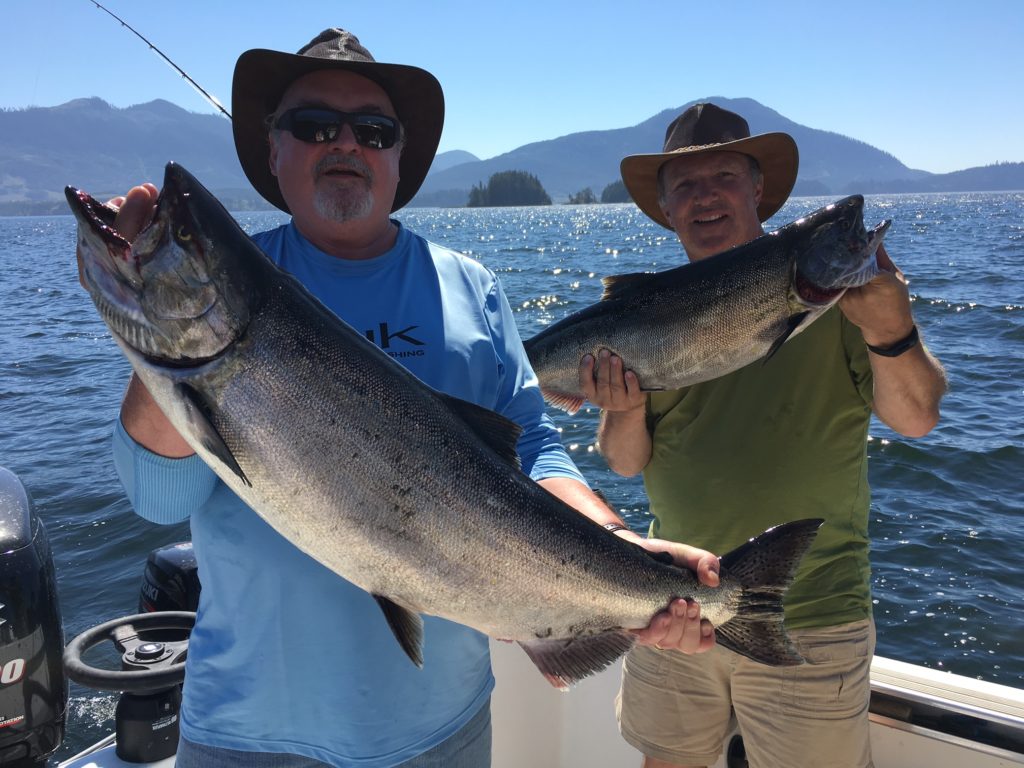 Over the last few weeks Stamp River conditions have been favorable. The water has been at the time of this writing is clear and low. Anglers have been using longer leaders and very light tackle. Those in the river have been on average hitting a few fish per day. Steelhead fishing has been in both the upper and lower river. There are Winter and Fall Steelhead in the system. These fish will spawn in the spring. Hopefully when conditions warm up so will the Stamp River fishing.