June has arrived and again like the last couple of years many would often think that because of the cool weather it was late March not early June. This is not to say that there have not been any fantastic spring days with warm temperatures. With the current cool and moist weather the rivers in the area are very high. For the early returning salmon moving to the big watersheds to the south and also the various local areas the early migration flow has been very smooth and fantastic for conservation purposes. The long term forecast is for the weather pattern to change and to warm up to normal or higher 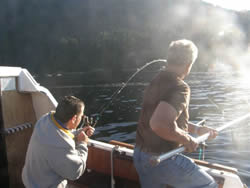 temperatures. For the many people coming to sport fish on the west coast in the month of June this is great news. The salmon fishing in Barkley Sound, the Bamfield area and inshore and offshore Ucluelet has been what one might describe as fair to good. There have been some great fishing days with Chinook averaging eight to fifteen pounds with a few of the clipped migratory salmon coming in at twenty pounds. The Somass River has had some of the early Sockeye enter the system. Over the past few days these numbers have really increased and the Somass is literally full of Sockeye ranging six to ten pounds. These salmon are making their way to either Sproat or Great Central Lake where they will sit in deeper water until the fall. There have been a few keen sport fishermen fishing at paper mill dam. The daily limit in the river for Sockeye is currently two. Inlet retention for Sockeye is four. There have been a few boats in the inlet with a little success in the Nahmint-Franklin area where large schools of Sockeye have been located.

Over the last number of years we have witnessed some world class salmon fishing opportunities. However this year the forecast is said to be the best year of the past decade. This will definitely be a fantastic year to take opportunity and sport fish in Port Alberni , Barkley Sound, or inshore offshore Ucluelet-Tofino. The Sockeye, Chinook, and Coho salmon will definitely be returning to natal rivers in big numbers. 2012 will be a remarkable salmon sport fishing year. 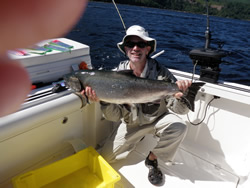 The sockeye salmon fishing consistently gets underway by mid June. Hopefully the water warms up somewhat in the river system and the air temperature also warms up. When the river hits seventeen or eighteen degrees celsius the Sockeye will slow on their migratory flow and begin to school in good numbers in the Alberni Inlet. The Sockeye early run is definitely currently bolting to the cool waters of the Somass. If the number of Sockeye returning are relatively large in numbers this will create a back log and the fish will back themselves up as far as the Nahmint-Franklin area. When the Sockeye are in big schools the sport fishing improves dramatically. June 15 th is always a great bet for the beginning of the season. The current retention for Sockeye in the Port Alberni Inlet is four per person per day with a two day possession limit of eight Sockeye salmon. Sockeye fishing is a lot of fun and is definitely a great family outing. The key to Sockeye Salmon fishing is color behind the boat. Most individuals will fish four rods with four same color flashers on each rod and then two to four dummy flashers connected to downriggers. Leader lengths normally are twenty-two to twenty-eight inches. A variety of mp hootchies are used with the mp 15 and 16 being the most popular along with the black and pink and blue and pink hippy hootchies. The forecast return of Somass River Sockeye is 825,000. This number when testing begins and when the counters are put in is expected to go over one million fish. Sockeye are a wonderful salmon and are the number “one” commercial fish. Sockeye are easy to keep when properly vaccuum packed and last well over a year in a home deep freeze. 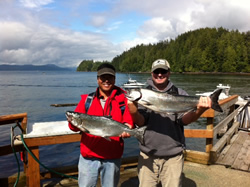 The Barkley Sound Salmon fishing has been what most guides and anglers would say as fair to good. Recently sport fishermen have often needed to be at the right spot at the right time. The Chinook salmon for the most part have been feeder springs and weigh on average eight to fifteen pounds. The best locations have been Beale and Little Beale and also Edward King. These locations are out on the surfline and the best fishing has been in tight to the rocky shoreline fishing in shallower water from thirty to sixty-five feet. Other hotspots in Barkley Sound have been Kirby Point, Vernon Bay , Swale Rock, Austin Island , and the Bamfield Harbor mouth. In these locations the fish have been as deep as one hundred and forty-five feet. Small coyote spoons at the the three and three and a half inch, anchovy in a Ryhs Davis chartreuse teaser head and needle fish hootchies have been the top producers. At this time of year one will always find the salmon where there are great quantities of bait. The Bamfield Harbor and parts of the Bamfield Wall have had big schools of small herring which has helped produce some excellent catches of feeder Chinook. There have been a few Coho showing but mostly further out on the various banks. Coho retention comes into place beginning on June the first. For those that prefer water that is protected Barkley Sound is the ideal fishing location as the east and west coastlines are protected from the prevailing winds and for the most part the water is calm and very flat. Barkley Sound will definitely have some fantastic salmon fishing during the upcoming summer months.

The fishing in Ucluelet has been very consistent during the spring. Of course weather can still play a major role but generally the water is very fishable inshore and offshore. There are a good number of days where the wind and water is calm and flat. The first of the migratory fish have showed up on the outside water on the inner and outer southbank and the wreck. Inshore there is still a good number of feeder springs plus a few of the clipped American fish that are headed to the big watersheds to the South. 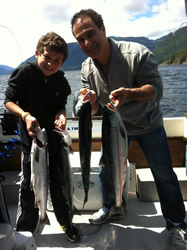 The forecast in terms of returning salmon to the three biggest watersheds including the Columbia and the Sacremento River are well over one million Chinook to each of the three biggest river systems. This is only three of over one hundred rivers that will definitely produce a heavy migratory flow on Vancouver Islands West Coast during the summer of 2012. The areas around the Ucluelet harbor producing Chinook have been Great Bear and Beg Island . The salmon have been in deeper water and once again when bait is in big schools there are good number of feeding salmon up to twenty pounds. The outer and inner southbank have also been good as has the turtle head and the wreck. One of the best days over the past week saw four guided guests pick up eight Chinook averaging thirteen to twenty pounds fishing at one hundred and fifty feet or close to the bottom using needle fish hootchies which have been working very well during the spring. Small green glow and nickel green coyote spoons have also been good but not as good as the needlefish hootchies. The fishing on the west coast will only get better as we get into June and July. In August the Chinook and Coho as they make their was to their natal rivers will have put on a lot of weight as they feed on the rich resources of bait fish provided along Vancouver Islands illustrious coastline. The 2012 summer and early sport salmon fishing will definitely be a fantastic season and one to remember for many years.