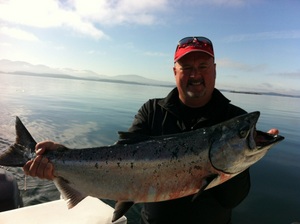 is well underway.  June on the West Coast of British Columbia and

to us plenty of saltwater sport fishing opportunities.  Chinook salmon

have been plentiful, especially in the Barkley Sound area, over the last

number of weeks.  The salmon are feeding heavily on needlefish, small

herring, and pilchards.  Barkley Sound along the surf line locations and

fishing with the Chinook averaging thirteen to just over twenty pounds.

The various banks just offshore from Ucluelet and Barkley Sound have

resources of bait fish along the inner and outer edges of the Sound.

Coho are also beginning to show inshore and also out on the banks.

bigger schools.  The early Coho have been averaging six pounds and are

early summer months put on up to a pound per week.  West Vancouver

the summer.  The Port Alberni Inlet should see some good

opportunities for sport Sockeye fishing in the near future.  The

sockeye per day per person.  To June the 16

The current range for returns to the Somass

seasonal forecast.  DFO has announced that there has been almost

Central Lake.  Escapement to date is 1,000 Sockeye to Great Central

The 2013 salmon sport fishing season should once again be

of May.  The retention level per person per day has been two.  On the

two day possession limit of eight Sockeye.  It is advised that sport

anglers continue checking DFO rules and regulations in case there is

any immediate change in the possession limits.  To this date there have

the waters of the inlet.  There has already been a fairly good number of

date have not schooled.  The snowpack in the nearby mountain

continued cool air mass circulating over the west coast of B.C. has kept

the water in the river and inlet cool.

River is very cool.  Those sport fisher persons hitting the water in the

the vast waters of Franklin-Nahmint.  The key to fishing Sockeye is lots

of color behind the boat, a slower troll and shorter leader lengths.  The

to twenty-seven inches behind a green or red hotspot flasher.  Sockeye

salmon are the number one commercial salmon and are fantastic on 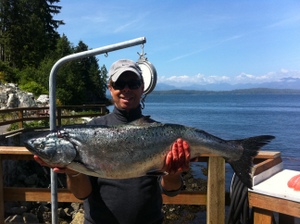 Barkley Sound salmon fishing has been fantastic for the last

number of weeks.  For those who like fishing in fairly calm water

Barkley Sound is perfect.  The Sound is scenic and the water is pristine

and calm in the mornings and evenings.  The open water of Imperial

Eagle Channel and Trevor Channel can have some wind in the

afternoons blowing in from the cooler waters of the vast Pacific Ocean.

Generally the two shorelines are easy to fish most of the day.  Barkley

Sound has had good numbers of bait fish in small herring, needlefish,

pilchards and anchovy.  The migrating salmon that are termed the early

summer run headed to the watersheds to the south have been

entering Barkley Sound and feeding heavily on these bait fish.   Most of

the salmon have been Chinook with the odd Coho in the mix.  The Coho

numbers should become more numerous as we approach the end of

June and the beginning of July.  The Chinook have been found in surf

Point.  Some of the best fishing has been at Meares, Swale Rock and

Vernon Bay.  The salmon have been averaging thirteen pounds to the

low twenties.  There have been a few fish in the low thirties landed.

Rock has been consistently remarkable on the Imperial Eagle side and

also on the back towards Howard Point.  Vernon Bay has had fantastic

sport fishing along the wall and the beach and also towards Alan Point.

hundred to one hundred and forty feet.  The best fishing rule right now

in the Sound is “where the bait fish are the salmon are close by”.  The

truck, green haze and chartreuse have all been good.  Hotspot flashers

have been great with various coyote and Gypsy spoons and anchovy

June and July for Chinook and Coho salmon.

Vancouver Island.  The transient salmon are in the midst of their long

journey back to their spawning grounds.  This year all of the inner and

outer offshore banks will have a very abundant mix of Chinook, Coho

and “odd year” Pink salmon.  Ucluelet fishing has been historically

of British Columbia.  The fishing in the early spring months is often

relatively close to the Ucluelet Harbour.   We are now into mid June

and the salmon fishing is now locating out to the various banks.   The

Chinook fishing.   The fishing which was very good in this location faded

the inner and also outer South bank areas.  During the past weekend

averaging six and seven pounds.  The Chinook this past weekend on

bottom and the Coho were swimming from 90 feet to the bottom.

Coyote spoons in the four inch size seemed to be working the best.

Green is always a good color in June.  Green Nickel and the green

was working very well.  Anchovy in a green haze teaser head was also

hootchies and cuttle fish.  The weekend weather and water conditions

especially Saturday was perfect offshore.  It was T-shirt weather and

great salmon fishing for all.  The Ucluelet Ladder Derby is underway

with tickets for the year at fifty dollars and daily tickets at ten dollars.

final fish off during the second weekend of September. 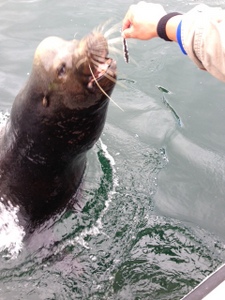 The summer of 2013 should prove to be another great season