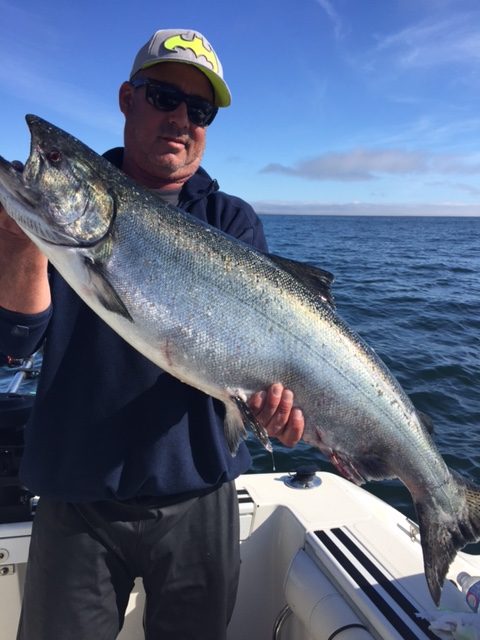 The summer months are quickly moving by and the salmon fishing in many areas of Vancouver Island just seem to be now picking up and getting better and better as we move into mid August. The salmon fishing in Barkley Sound and the West Coast off of the Ucluelet Harbor for Chinook and Coho have improved dramatically. The Chinook and Coho on the surf line and the various banks are getting larger and more numerous. Most of these salmon continue to be migratory salmon moving to destinations or watersheds well to the south. Many of the West Coast Vancouver Island salmon are now also beginning to show on surf line areas and on the west and east shorelines of Barkley Sound. We are expecting some of the salmon returning to nearby rivers, streams, and creeks of the Pacific Rim and Alberni Valley regions to be the highest return in a decade. From mid August into the first half of September there should be some world class sport fishing out in most of Barkley Sound. The Port Alberni Inlet with salmon migrating into the Somass River will have a good return of Chinook. By mid August good numbers of these Chinook will begin to show in Inlet areas close to China Creek and the Port Alberni Harbor. 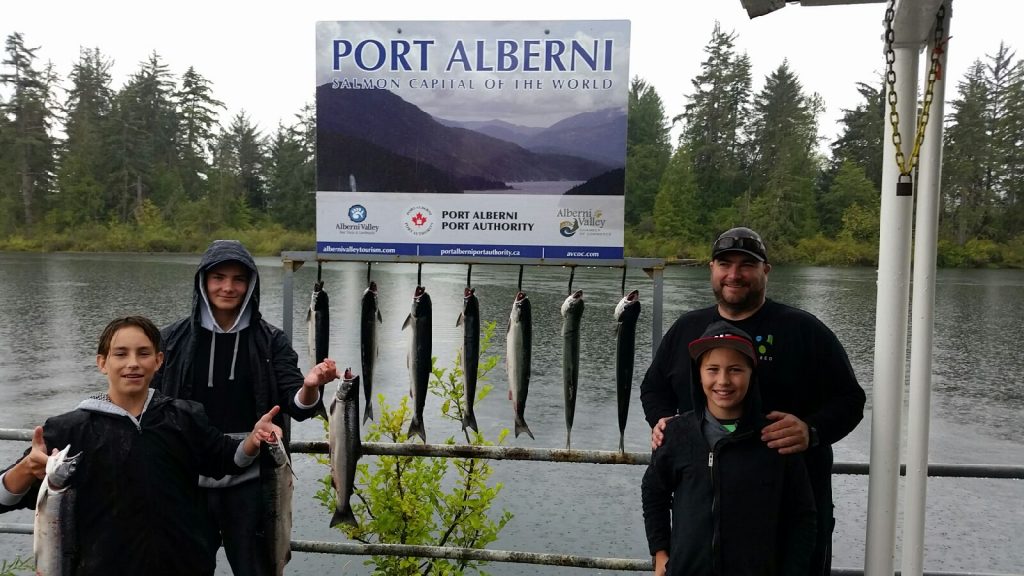 Sockeye Salmon fishing continued strong into August in the Alberni Inlet. Family from Kelowna fished with Slivers Charters and did extremely well on Sockeye Salmon

The sport fishing in the Port Alberni Inlet for Sockeye salmon in June and July was incredible. The sockeye return forecast still holds at 1.1 million which was a fantastic run and return. Returns to the system for conservation are at four hundred and fifty thousand. These fish have migrated into Sproat and Great Central Lakes and will sit in deep water until the fall before spawning. The Chinook returns to the Somass system should begin with salmon showing in good numbers in Inlet areas by the middle of August. Pre season forecasts are showing s very high number of Chinook returning to the terminal area of Barkley Sound and the Inlet. Most of these fish will be returning to the Robertson Creek Hatchery. The age class of this year’s return is predominately four and five year old Chinook. With this in mind there should be a good number of Chinook in the twenty to twenty-five to thirty pound class. Coho numbers are hopefully expected to be normal. Coho returns to the Pacific Rim and the many creeks and stream tributaries of the Somass system through conservation have become stronger over the past decade. We should see Somass-Stamp River Coho begin to show in Barkley Sound close to the end of August and peak during the second week of September before moving into the inlet. 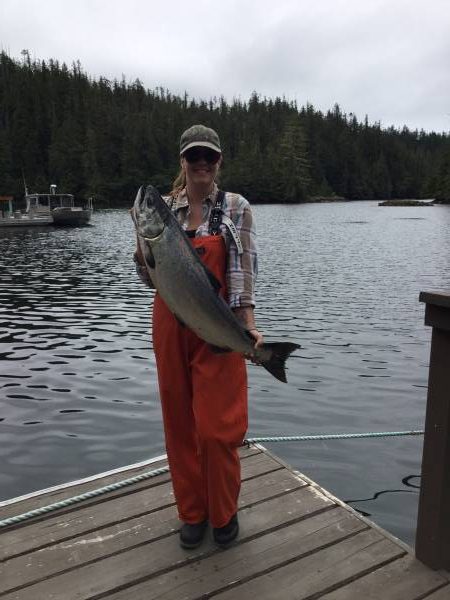 Most of Barkley Sound has been mediocre through June and July and the first week of August. Swale Rock, Austin Island, Cree and Pill Point have been the only spots with any consistency. Meares or Effingham Island and Austin Island out to Cree Island has been the best area for the sport fishery for most of the summer months. The salmon have been out in the deep water on the low tide and often on the flood move in towards the rocks and feed on the huge quantities of rich resourced bait fish. Chinook have been in 80 to 120 feet of water and have been averaging from the mid teens to mid twenties in terms of weight. The Chinook that are now showing and returning to local rivers are much shallower. The Coho have been in twety-five to fifty feet of water and are gorging themselves putting on a pound a week and are currently averaging eight to fifteen pounds. Some of the salmon are migratory fish moving to watersheds to the south. The West Coast Vancouver Island salmon are now arriving. This is not to say that some Somass Chinook and Coho have not already arrived as there have been some fairly early returns to the Somass system over the past ten days. When fishing the waters of Barkley Sound it is ideal if sport fishermen have anchovy on board. To this date anchovy has not been essential as the salmon have been hitting various small three and a half inch coyote spoons and some hootchies behind glow and kinetic flashers. In Coyote spoons, silver glow, Cop Car, Cookies and Cream and Irish Cream have all been working. Various small Coho Killers have all been working. The various whites (AORL12) and greens and blues in hootchies have had some great success over the past week. Anchovy should have at least a six foot leader and the army truck, purple haze, and green haze in Rhys Davis Teaser Head have all been working well. We are expecting Barkley Sound to have continued great salmon fishing well into September. With the late summer run of migratory salmon and local salmon returning to their natural streams and creeks there should be some continued terrific fishing right into mid September in all of Barkley Sound for Coho and Chinook salmon. 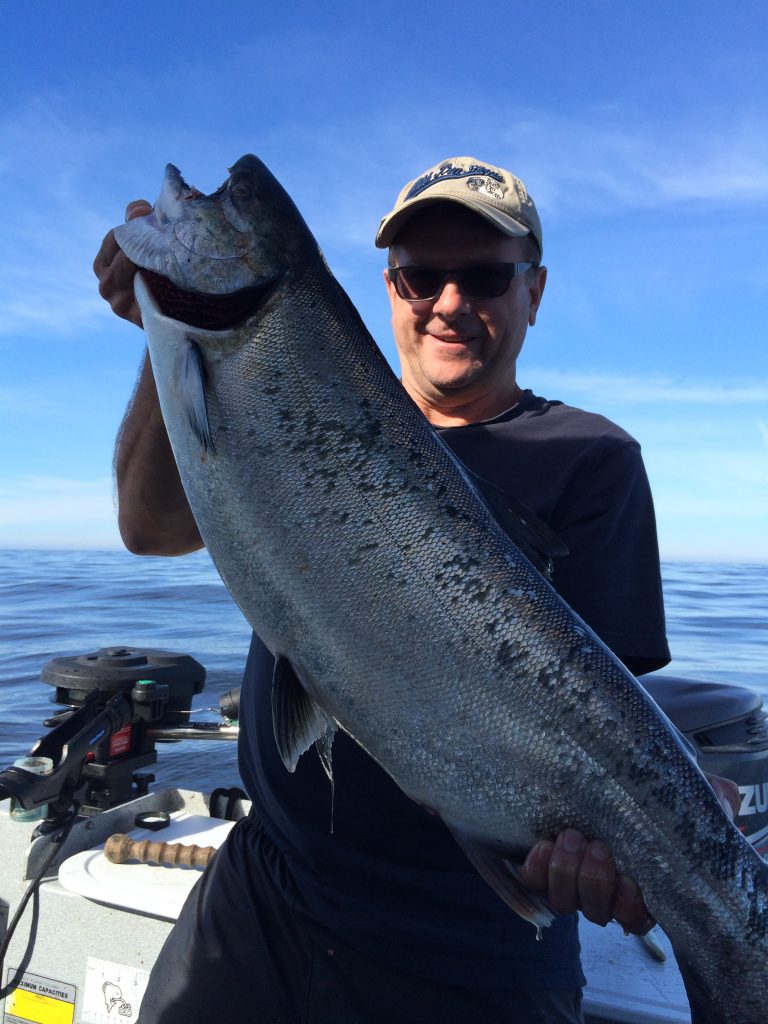 Areas outside of the Ucluelet Harbor around the Starfish, Hyacinth and Long Beach and as far as the Big Bank or shallows West to Portland Point which is close to Tofino have all had rather phenomenal sport fishing over the last few weeks. Most of the banks have had plenty of bait fish and the migratory salmon have been feeding heavily in these many favorite offshore Ucluelet areas. When bait fish are in the different areas during the summer months the sport fishing is normally extraordinary. The Big Bank (Rats Nose) the Starfish and Hyacinth have been the best areas to fish to date. Hootchies and smaller spoons seem to be working the best offshore. Some sport fishermen are using bait and having great success but like Barkley Sound bait has not been essential. Over the past week the Chinook salmon have been getting bigger as there are many more in the mid to upper twenty pound range being landed by guests on our charter boats. Sport fishermen in their privately owned boats have also been landing some bigger fish. A few Coho offshore are also getting up and over the ten pound mark with a few fish in the low to mid teens being landed. August and September are really exciting months to be on the water. These are the two months that bigger Chinook and Coho begin to arrive along the west coast of Vancouver Island, B.C. as they have been spending weeks during their long migration feeding constantly on bait fish.

The saltwater sport fishing for the rest of 2016 should be fantastic on the surf line and offshore west coast Vancouver Island locations. We are really expecting the inshore areas of Barkley Sound to pick up as well as the Port Alberni Inlet during the last two weeks of August. If you are thinking of a fishing trip, this is the year and August and the early part of September is the time to come.